In Photos: The World’s Most Efficient Pollinators

Bumblebees are vanishing from their traditional range, largely because of climate change, according to a new study that published July 9 in the journal Science. Though populations are disappearing from the hottest regions they inhabit, they are not spreading north to make up for lost ground, the study found. And unlike honeybees, which are declining in part because of widespread use of certain types of insecticides, land use and pesticide use didn’t seem to play a big role in the bumblebee disappearance from southern locales. (Read the full story on the pollinators’ decline)

Bumblebees evolved about 35 million years ago in cooler climates. The buzzing insects are the superstars of the pollinator world, working harder, longer and on a broader variety of species than other bee species. Here, a red-bellied bumblebee cozies up to a lupine. Its body is covered in pollen, which it will spread to other flowers, thereby helping the lupine plant complete its reproductive cycle. (Credit: Jeremy T. Kerr.) 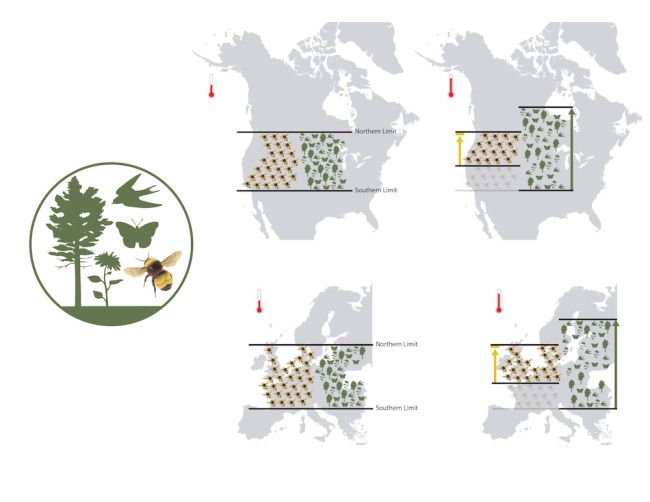 In the new study, researchers found that bumblebee populations have disappeared from its historic southern edges but have not colonized northern areas that have warmed. The trend tracked with human-caused climate change, but was not caused by exposure to pesticides or land-use practices. (Credit: Ann Sanderson, Sheila Coila.)

The reason for the decline in hotter areas is clear: the bumblebees did not evolve to tolerate extreme heat, and simply die off during hot weather. Here, a red-tailed bumblebee dines on garden plants in the United Kingdom. (Credit: Jeremy T. Kerr.)

The study also found that bees are moving up mountainsides, residing at higher altitudes than they previously had. Once again, global warming may be the culprit here, as temperatures drop as elevation increases.  (Credit: Ann Sanderson, Sheila Coila.)

Here, a red-tailed bumblebee from Denmark dips its nose into a flower. Bumblebees aren’t the only pollinators in the insect world; about 20,000 other bee species also play a critical role. But many of those bees pollinate just two or three plants, or are active for just a few weeks of the growing season, researchers said. (Credit: Jeremy T. Kerr.)

The buff-tailed bumblebes, like the one shown here, is one species of bee that is doing just fine despite global warming. The hardy, weedy species, called the dandelion of the bumblebee world, seems to be able to adapt to new areas fairly quickly because it lives in large colonies. That, in turn, may help the bees quickly establish new populations in new habitats, researchers speculate. (Credit: Jeremy T. Kerr.)