Carnivorous plants are the ‘most skillful green hunters on the planet.’ 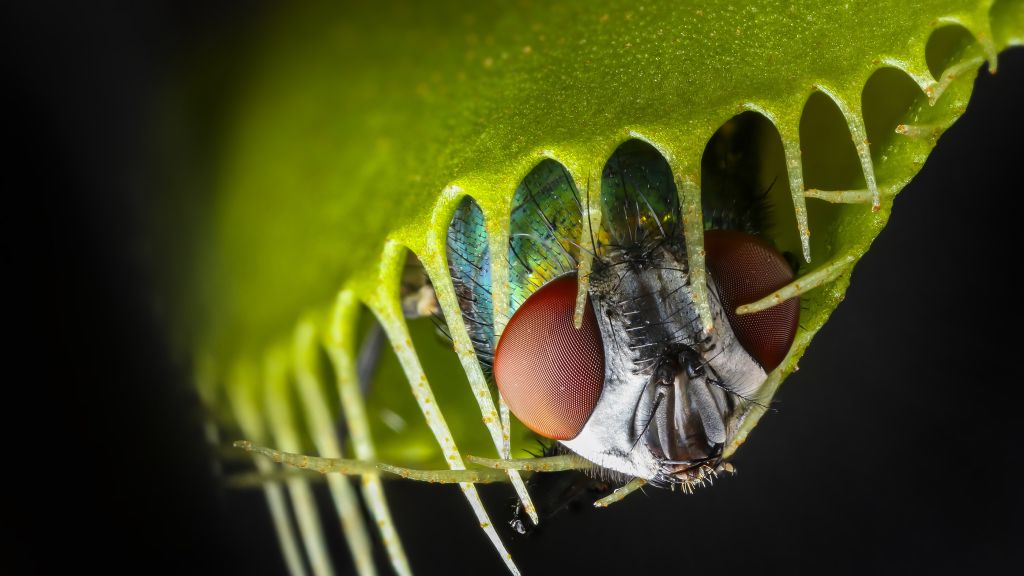 About 70 million years ago, when dinosaurs roamed the Earth, a genetic anomaly allowed some plants to turn into meat eaters. This was done in part, with a stealthy trick: repurposing genes meant for their roots and leaves and using them instead to catch prey, a new study finds.

This step is one of three that some non-carnivorous plants took over tens of millions of years to allow them to turn into hungry carnivores, the researchers said.

There’s something unsettling about the idea of meat-eating plants, as this trapped Pacific tree frog can attest. Venus flytraps are one of the few plants that can move rapidly enough to capture bugs (and sometimes small mammals) for digestion.

The meat-eating shift gave these plants a number of advantages. In effect, “carnivorous plants have turned the tables by capturing and consuming nutrient-rich animal prey, enabling them to thrive in nutrient-poor soil,” the researchers wrote in the study, published online May 14 in the journal Current Biology.

To investigate how carnivorous plants evolved, an international team of botanists and biologists led by Jörg Schultz, Associate Professor, at the University of Würzburg, Germany, compared the genomes and anatomy of three modern meat-eating plants

Found on every continent except Antarctica, sundews ensnare creepy-crawlies on their sticky pink stalks and then absorb the bugs’ nutrients.

There are hundreds of carnivorous plant species, but the researchers chose to look at three related insect-eating plants, all members of the Droseraceae family. All three of these plants use motion to capture prey, the researchers said.

One plant is the familiar Venus flytrap (Dionaea muscipula), a native to the wetlands of the Carolinas that has influenced Pokémon characters, made appearances in various Saturday morning cartoons, and even inspired a Broadway play. The closely related aquatic waterwheel plant (Aldrovanda vesiculosa) occupies the waters of almost every continent. It has spindly underwater flaps that quickly tighten around unsuspecting marine animals. The third plant investigated, the beautiful but deadly sundew plant (Drosera spatulata), is common in Australia. Luring victims with sweetness, the sundew rolls up a sticky strip around its catch.

An ant walks a dangerous line in the maw of a Venus flytrap.

After analyzing these plants, the team discovered the three-step process toward carnivory. First, about 70 million years ago, an early non-carnivorous ancestor of the three modern plant carnivores underwent a whole-genome duplication, generating a second copy of its entire DNA, or genome. This duplication freed up one of the copies of leaf and root genes to diversify, allowing them to serve other functions. Some leaf genes developed into genes for traps, while carnivorous nutrition and absorption processes were guided by genes that otherwise would have served roots seeking nutrition from soil.

Venus flytraps thrive in poor soil because they can gather extra nutrients from meaty insects and arachnids. Tiny hairs on their clamshell-like traps cause the traps to snap shut when triggered. Enzymes then digest the plant’s prey, a process that take days.

The second step in their journey to carnivory occurred once the plants began receiving new nutrients from prey. At that point, traditional leaves and roots were no longer as necessary. Many genes that were not involved in carnivorous nutrition began to disappear. For instance, seedlings of aquatic waterwheel plants acquire an early proto-root, but it fails to develop as they mature. This is the only remnant of what once was a root system. As a result of losing this gene and others, the three plants observed in this study are the gene-poorest plants to be sequenced to date, the researchers stated.

Two earlier studies by other groups of scientists in 2013 showed similar gene-poor findings in other carnivorous plants. They found that an aquatic bladderwort thriving on all continents but Antarctica and a corkscrew ground-covering plant native to Brazil both had very small genomes compared with non-carnivorous plants. These carnivores may also have undergone the same gene-shedding process, the researchers of the new study said.

In the third step of the transformation to carnivory, the plants underwent evolutionary changes specific to their environment. The roots and leaves evolved to be trap-specific, the researchers found. Genes for roots that were once used to seek out and absorb nutrients from soil were now commandeered to create enzymes needed to digest and absorb nutrients from prey. Genes once used in glands that secreted nectar to attract pollinating insects were summoned to traps, where they produce substances to attract prey.

Like Venus flytraps, sundews can move their tentacle-like appendages in response to stimulation by prey. But sundews move relatively slowly compared with Venus flytraps, so they depend on a sticky mucus to trap bugs.

Most plants with leaves and roots contain the material necessary to become carnivorous. Researchers wrote that the three-step process revealed by the new study shows how, over time, ancient “non-carnivorous plants evolved into the most skillful green hunters on the planet.”

The cobra lily’s snake-like beauty hides a pit of horrors. Lured into the pitcher by sweet-smelling nectar, bugs find themselves lost in a maze of false exits. Few make it out alive. Instead, it’s down the slippery tube to a small pool of bacteria-rich water, where the bugs become plant food.

The hooded pitcher plant, or Sarrancenia minor, grows in coastal regions from Florida to North Carolina. White patches let light into the hood, perhaps to lure insects further inside.

A rare frost in Hillsborough county, Fla., coated the tentacles of this sundew in ice.

Another Borneo pitcher plant, Nepenthes rafflesiana elongata, has evolved as an ideal roost for small woolly bats. The relationship is mutually beneficial: Bats get a place to sleep during the day, and the pitcher plant gets the guano.

Some carnivorous plants have a rather creative way of getting their nutrient fix. The Nepenthes lowii pitcher plant in Borneo attracts tree shrews with sweet nectar. If they need to relieve themselves while eating, the shrews are perfectly positioned on the pitcher plant. Gross? Not for the plants, which get between 57 percent and 100 percent of their nitrogen from shrew poop.

The trap of the aquatic bladderwort plant Utricularia vulgaris closes 100 times faster than a Venus Flytrap, according to a 2011 study by Philippe Marmottant and colleagues. The traps are just a few millimeters long, but generate a suction force 600 times that of gravity, trapping tiny aquatic crustaceans and other unlucky prey.