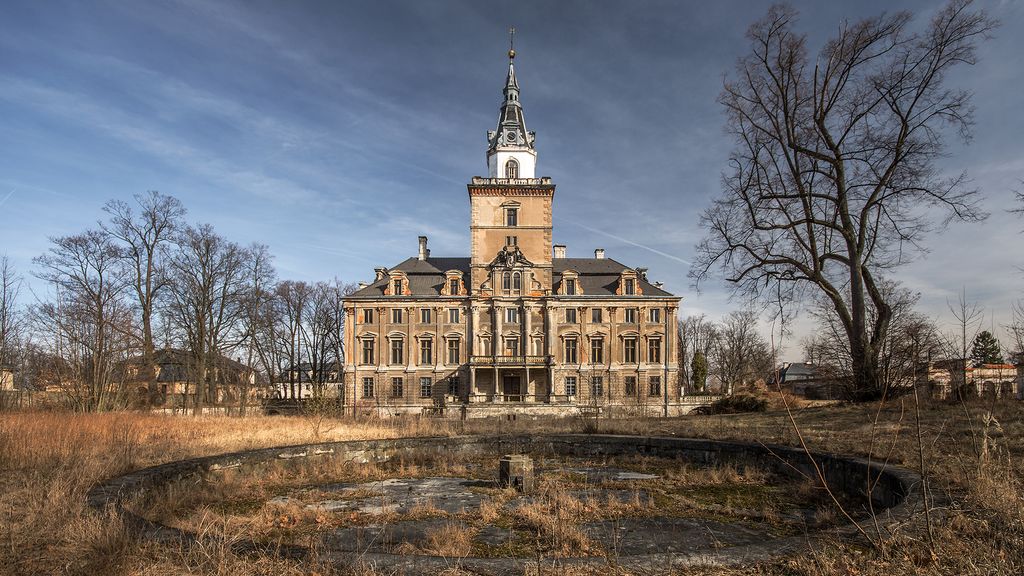 There might be billions of dollars worth of treasure stolen by the Nazis under a 16th century palace in southwestern Poland.
(Image: © Photo by Sławomir Milejski, CC BY 3.0, https://commons.wikimedia.org/w/index.php?curid=56829213)

A diary that was in the possession of a secret society for decades after the end of World War II may contain a map detailing the location of more than 30 tons (28 metric tons) of gold that was hidden by the Nazis.

The diary listed 11 sites where Nazis concealed looted gold, jewels, priceless paintings and religious objects. One location that it names is an abandoned well that extends nearly 200 feet (60 meters) underground, beneath the 16th-century Hochberg Palace in the village of Roztoka, in southwestern Poland. The gold at the bottom of the well is thought to have come from the Reichsbank in the Polish town of Breslau (now Wrocław) and is estimated to be worth billions of euros, TFN reported on May 26.

For decades after the war, the “Michaelis” diary was kept secret, hidden away in the town of Quedlinburg, Germany. It was in the possession of a Masonic lodge that has existed as a secret society for more than 1,000 years and counted elite Nazi officers among its members during the time of the Third Reich. One member, allegedly, was “Michaelis,” who controlled Nazi transport in southwestern Poland, TFN reported. Lodge members in later years included descendants of Nazi officers, according to TFN.

But in 2019, the lodge gave the diary to a Polish foundation named Silesian Bridge. The foundation announced in March of last year that it had received the journal from its German “partners” — the lodge members in Quedlinburg — who gifted the journal to the people of Poland as “an apology for World War II,” TFN reported.

Included with the journal was a map that purportedly pinpointed the location of the well on the Hochberg Palace grounds where the Nazi treasure was hidden, Roman Furmaniak, a representative of Silesian Bridge, told TFN. Additional documents suggest that after the Nazis hid their ill-gotten riches, they murdered witnesses, dumped the bodies in the well, and then detonated explosives to seal the entrance, Furmaniak told TFN.

Experts have determined that the diary was written at the time of WWII, but the journal’s authenticity has yet to be confirmed by Poland’s Ministry of Culture and National Heritage, ministry representative Magdalena Tomaszewska told TFN.

However, the palace stands in Lower Silesia, a region in Poland that gained notoriety during and after WWII as a location where the Nazis concealed goods stolen from wealthy Jews, as well as art that had been looted from museums and galleries, according to the Polish Ministry of Foreign Affairs. Lower Silesia was riddled with caves, mines and tunnels, “as well as castles and palaces with cavernous dungeons,” which offered the Nazis plenty of hiding places for even very large works of art, according to the ministry.

After the war, the U.S. government’s Art Looting Intelligence Unit (ALIU) linked a director of the Silesian Museum named Günther Grundmann to stolen art in Lower Silesia. Grundmann created a list of 80 sites in Lower Silesia — one of which was the Hochberg Palace — where he concealed precious objects and wealth, but many of these caches are thought to have been looted by the invading Russian army as they marched through on their way to Germany, according to the Polish Ministry of Foreign Affairs.

The Nazis plundered an estimated 5 million European artworks from Jews, museums and private collections, and a team of 350 Allied officers and experts known as “Monuments Men” — an investigative unit of the ALIU — were tasked with tracking them down after the end of the war, ABC News reported in 2013. At one site alone, a salt mine complex in Altaussee, Austria, there were thousands of stolen paintings, illustrations, rare books, statues and tapestries. A cache of explosives in the mine complex was meant to have been blown up in the event of Germany’s defeat, but the explosives were never detonated, ABC News reported.

About 63,000 artworks and cultural artifacts that were stolen from Polish Jews by the Nazis are still missing, and the Polish government is actively working to secure their return, The New York Times reported in January. However, officials in Poland have themselves been criticized for failing to return paintings in national museum collections that were stolen by the Nazis from Jewish collectors in the Netherlands, according to the Times.

As for the alleged golden hoard under Hochberg Palace, the owners plan to refurbish and restore the building, which has fallen into disrepair, and upcoming conservation work will include a search for the long-buried well, TFN reported.