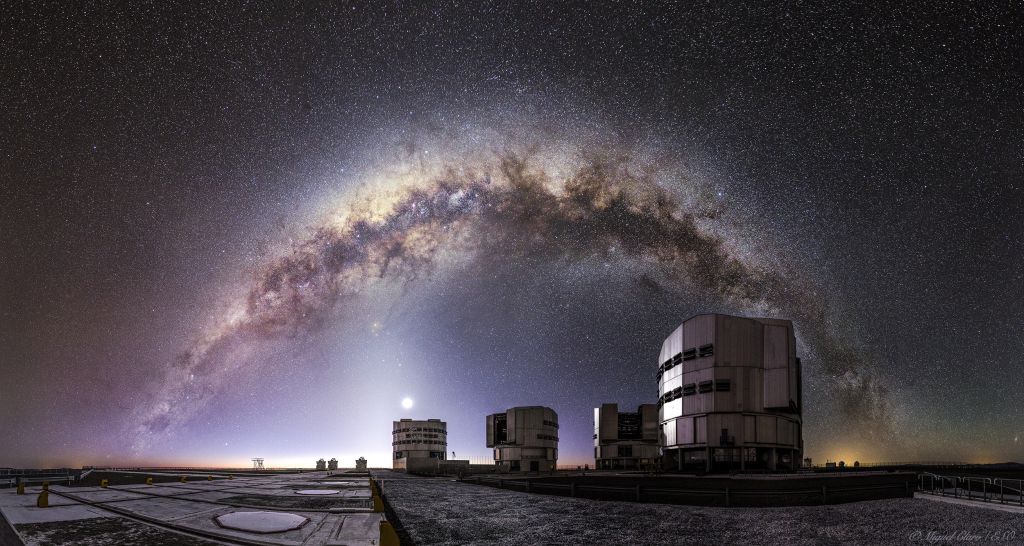 The entire arc of the Milky Way can be seen in the southern sky in this view from the European Southern Observatory’s Very Large Telescope at the Paranal Observatory in Chile’s Atacama Desert.
(Image: © Miguel Claro)

Seated in the Atacama Desert of Chile, the European Southern Observatory (ESO)’s Very Large Telescope (VLT) consists of four main telescopes and four smaller telescopes that can be used separately or combined into a single larger instrument powerful enough to distinguish two car headlights at the distance of the moon.

The VLT is located at Paranal Observatory in the Atacama Desert. The four Unit Telescopes boast 8.2-meter (27 feet) mirrors. Just one of these instruments can spot objects that are 4 billion times fainter than what can be seen with the unaided eye. According to the ESO’s website, the VLT is “the world’s most advanced optical telescope.”

The first of the four instruments, Unit Telescope 1 (UT1), saw first light on May 25, 1998, and went into scientific operations on April 1, 1999. UT2 saw first light only four days before the observatory’s March 5, 1999, inauguration.

The four Unit Telescopes sit in compact, thermally controlled buildings that rotate with the instruments. These buildings minimize adverse effects, such as turbulence in the telescope tube, on observations.

At the inauguration, the four Unit telescopes were given names in the Mapuche language, from an indigenous people living in the area south of Santiago de Chile. Chile’s schoolchildren participated in the naming, with an essay by then-17-year-old Jorssy Albanez Castilla unanimously selected by the committee.

Together, the eight telescopes can create a massive interferometer. However, the Unit Telescopes are more often used individually, and are only available to be combined for a limited number of nights each year. The four smaller Auxiliary Telescopes, however, are available to allow the interferometer to operate each night. 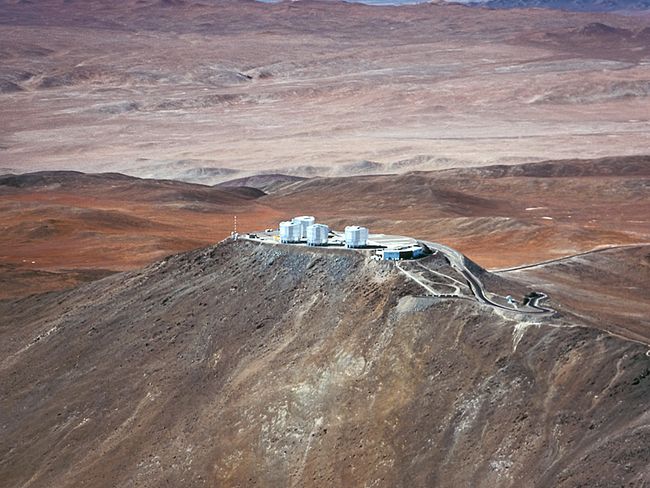 In February 2018, the ESPRESSO instrument (Echelle SPectrograph for Rocky Exoplanet and Stable Spectroscopic Observations) on the VLT allowed the four Unit Telescopes to combine light from all four telescopes for the first time, making the VLT the largest optical telescope in existence in terms of collecting area. Due to the complexity involved, the light from the four had not been previously combined; only three Unit Telescopes could be combined at once.

“This impressive milestone is the culmination of work by a large team of scientists and engineers over many years,” project scientist Paolo Molaro said in a statement. “It is wonderful to see ESPRESSO working with all four Unit Telescopes, and I look forward to the exciting science results to come.”

“ESO has realized a dream that dates back to the time when the VLT was conceived in the 1980s: bringing the light from all four Unit Telescopes on Cerro Paranal together at an incoherent focus to feed a single instrument!” said ESPRESSO instrument scientist Gaspare Lo Curto.

The science of the VLT

Over nearly two decades, the VLT has made significant contributions to astronomy, snapping the first image of an exoplanet, capturing the first direct measurements of the atmosphere of a super-Earth, and taking the universe’s cosmic temperature. In addition, the observatory’s hotel served as a villain’s hideout in the James Bond flick, “Quantum of Solace.”

In 2004, a team of European and American astronomers studying the TW Hydrae Association, a group of very young stars and other objects, spotted a red speck of light near one of the association’s brown dwarfs. The object was more than 100 times fainter than its parent star. Further observations confirmed that it was an exoplanet orbiting its star at 55 times the Earth-sun distance.

“Our new images show convincingly that this really is a planet, the first planet that has ever been imaged outside of our solar system,” ESO astronomer Gael Chauvin said in a statement.

In 2008, a team of scientists used the VLT to discover and image an object near the star Beta Pictoris. Most directly imaged exoplanets lie far from their stars, past where Neptune would orbit, where stellar light is dimmer. In contrast, the planet Beta Pictoris b lies much closer, where Saturn would orbit.

“Direct imaging of extrasolar planets is necessary to test the various models of formation and evolution of planetary systems,” researcher Daniel Rouan said in a statement. “But such observations are only beginning. Limited today to giant planets around young stars, they will in the future extend to the detection of cooler and older planets, with the forthcoming instruments on the VLT and on the next generation of optical telescopes.” 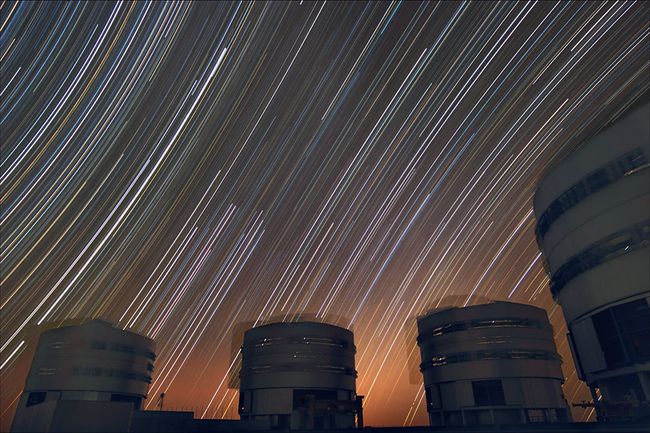 The sky appears to rotate above ESO’s Very Large Telescope in this long exposure. The star trails curve away from the celestial equator in the middle of the photo, where the stars seem to move in a straight line.

“It is not known why some planets spin fast and others more slowly,” researcher Remco de Kok said in a statement. “But this first measurement of an exoplanet’s rotation shows that the trend seen in the solar system, where the more massive planets spin faster, also holds true for exoplanets. This must be some universal consequence of the way planets form.”

The private organization Breakthrough Initiatives has enlisted the help of the VLT to hunt for planets around Earth’s closest star, Proxima Centauri. After helping to fund an upgrade to an existing instrument on the VLT, Breakthrough Initiatives will receive time for a “careful search” of the Proxima Centauri system for new planets. The improvement in the VLT Imager and Spectrometer for Mid Infrared instrument will equip it with a coronagraph, which blocks much of the light from a star, as well as an adaptive optics system to correct for distortions in starlight caused by Earth’s atmosphere. The upgrade is scheduled to be completed in 2019.

The VLT was also instrumental in revealing a system of seven Earth-sized planets just 40 light-years from Earth. The TRAPPIST-1 system boasts seven worlds, six of which appear to be rocky. All seven could potentially boast liquid water on their surface, though the innermost three appear to be too hot to hold onto it on more than a fraction of their surface. After an intriguing observation on the VLT in early 2016, when the system was first announced, researchers used multiple telescopes, including the VLT, to follow-up and observe the seven worlds.

“This is an amazing planetary system — not only because we have found so many planets, but because they are all surprisingly similar in size to the Earth!” said researcher Michaël Gillon of the STAR Institute at the University of Liège in Belgium. 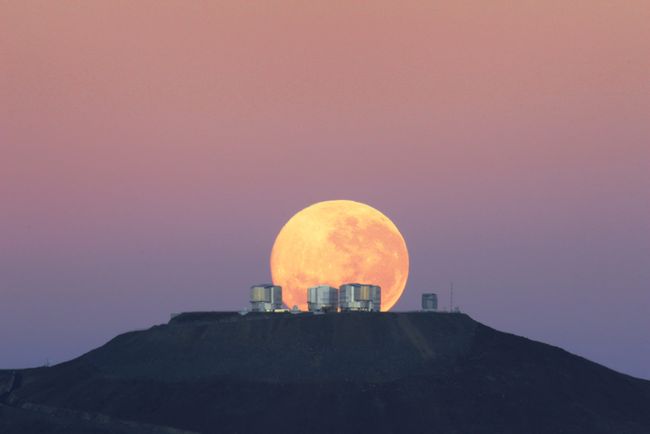 The VLT has also been used to probe exoplanet atmospheres. In 2010, it studied the super-Earth GJ1214b and found an atmosphere dominated by thick clouds or hazes.

“This is the first super-Earth to have its atmosphere analyzed. We’ve reached a real milestone on the road toward characterizing these worlds,” researcher Jacob Bean said in a statement.

“This is the first time that these three molecules have been detected in absorption in front of a quasar, a detection that has remained elusive for more than a quarter century,” Cédric Ledoux, an ESO researcher, said in a statement.

The VLT has played a role in many other lines of research. According to the ESO’s website, an average of one paper a day is published in a peer-reviewed journal using the VLT’s observations. 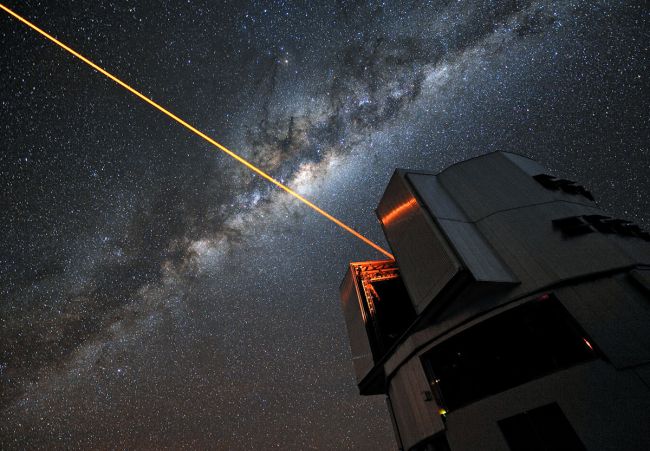 A glowing laser shines forth from the European Southern Observatory’s Very Large Telescope, creating an artificial star 90 km above the surface of the Earth used to fine-tune the telescope’s optics.

The European Southern Observatory’s Very Large Telescope was used to obtain this view of the nebula LHA 120-N 44 surrounding the star cluster NGC 1929. Lying within the Large Magellanic Cloud, a satellite galaxy of our own Milky Way, this region of star formation features a colossal superbubble of material expanding outwards due to the influence of the cluster of young stars at its heart that sculpts the interstellar landscape and drives forward the nebula’s evolution.

This view shows one of the Unit Telescopes of ESO’s Very Large Telescope (VLT) sitting beneath bright star trails circling the south celestial pole, a point in the sky that lies in the southern constellation of Octans (The Octant). Image released Jan. 7, 2013.

This image of the Omega Nebula (Messier 17), captured by the European Southern Observatory’s Very Large Telescope, is one of the sharpest of this object ever taken from the ground. It shows the dusty, rosy central parts of the famous star-forming region in fine detail.

The VLT in Action

The ESO Very Large Telescope (VLT) during observations. In this picture, taken from the VLT platform looking north-northwest at twilight, the four 8.2-metre Unit Telescopes (UTs) are visible.

This panorama of the Carina Nebula, a region of massive star formation in the southern skies, was taken in infrared light using the HAWK-I camera on the European Southern Observatory’s Very Large Telescope in Chile and released Feb. 8, 2012. Many previously hidden features, scattered across a spectacular celestial landscape of gas, dust and young stars, have emerged.

This amazing image seems to show the Milky Way streaming down not once, but twice, at ESO’s Very Large Telescope on Chile’s Cerro Paranal mountain. Actually, the photo shows a 360-degree panorama of the sky, so the two streams of stars are two halves of the band of the Milky Way arcing across the sky.

Yepun’s Laser and the Magellanic Clouds

The European Southern Observatory’s Very Large Telescope has taken the most detailed image so far of a spectacular part of the stellar nursery called NGC 6357. The view shows many hot young stars, glowing clouds of gas and weird dust formations sculpted by ultraviolet radiation and stellar winds.

VLT Looks into the Eyes of the Virgin

This striking image, taken with the FORS2 instrument on the Very Large Telescope, shows a beautiful yet peculiar pair of galaxies, NGC 4438 and NGC 4435, nicknamed The Eyes. The larger of these, at the top of the picture, NGC 4438, is thought to have once been a spiral galaxy that was strongly deformed by collisions in the relatively recent past. The two galaxies belong to the Virgo Cluster and are about 50 million light-years away.

This very detailed false-colour image from ESO’s Very Large Telescope shows the dramatic effects of very young stars on the dust and gas from which they were born in the star-forming region NGC 6729.

The central region of the Orion Nebula (M42, NGC 1976) as seen in the near-infrared by the High Acuity Wide field K-band Imager (HAWK-I) instrument at ESO’s Very Large Telescope at Paranal.

This infrared image of the nearby galaxy Messier 83 was taken by ESO’s Very Large Telescope (VLT) at the Paranal Observatory in Chile.

Join our Space Forums to keep talking space on the latest missions, night sky and more! And if you have a news tip, correction or comment, let us know at: community@space.com.

The spectacular star-forming Carina Nebula has been captured in great detail by the VLT Survey Telescope at ESO’s Paranal Observatory. This picture was taken with the help of Sebastián Piñera, President of Chile, during his visit to the observatory on June 5, 2012 and released on the occasion of the new telescope’s inauguration in Naples on Dec. 6, 2012.

This ESO Very Large Telescope image shows the planetary nebula Fleming 1 in the constellation of Centaurus (The Centaur). New observations suggest that a very rare pair of white dwarf stars lies at the heart of this object, with their orbital motions explaining the nebula’s remarkably symmetric jet structures. Image released Nov. 8, 2012.