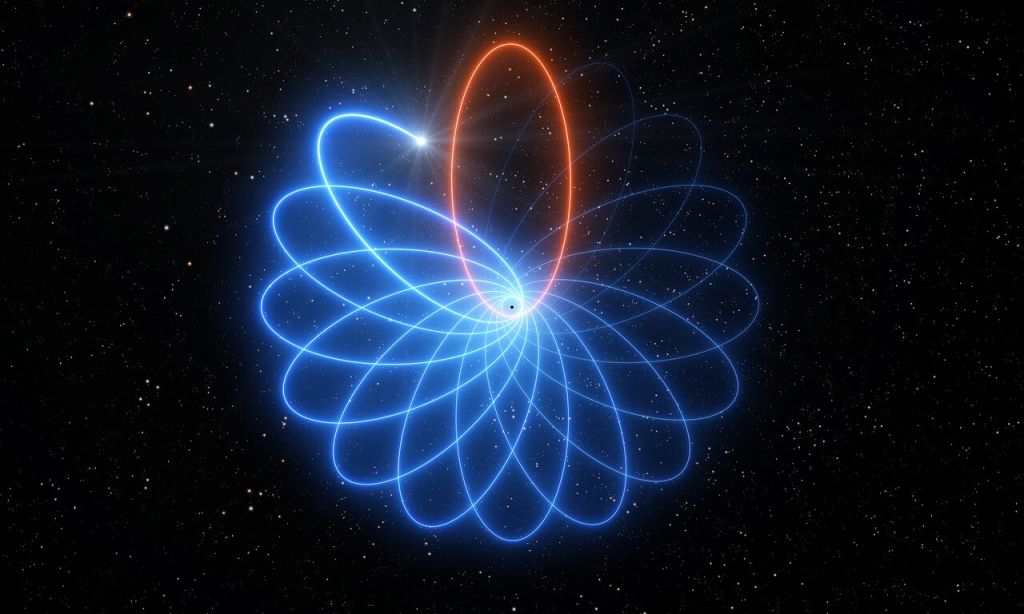 An artist’s impression of the star S2 precessing around the black hole at the center of the Milky Way.
(Image: © ESO/L. Calçada)

Einstein’s theory of general relativity has been proven right (again!), thanks to the wobbly dance of a high-speed star swirling around the monster black hole at the center of our galaxy.

Astronomers with the European Southern Observatory (ESO) have been watching that star — named S2 — orbit our local supermassive black hole for 27 years, taking precise measurements of the star’s position and velocity as it swoops around the galactic center, roughly 26,000 light-years from Earth. After watching the star complete nearly two full orbits (each complete orbit takes about 16 years), the researchers concluded that the star does not have a fixed elliptical orbit as predicted by Isaac Newton’s theory of gravity, but rather “dances” around the black hole in a pattern that resembles a rosette drawn using a spirograph.

This sort of orbit, where the star’s point of closest approach moves subtly around the black hole with each orbit, is known as Schwarzschild precession. This wonky sort of precession (or forward movement) was predicted by Einstein more than 100 years ago to describe the effects of an infinitesimally small object orbiting an extraordinarily massive one, the researchers wrote in their new study, published online today (April 16) in the journal Astronomy & Astrophysics.

“Einstein’s general relativity predicts that bound orbits of one object around another are not closed, as in Newtonian gravity, but precess forward in the plane of motion,” study co-author Reinhard Genzel, director of the Max Planck Institute for Extraterrestrial Physics in Germany, said in a statement. “This famous effect — first seen in the orbit of the planet Mercury around the sun — was the first evidence in favor of general relativity. One hundred years later, we have now detected the same effect in the motion of a star orbiting the [black hole] at the center of the Milky Way.”

This is the first time that Schwarzschild precession has been confirmed in a star orbiting a black hole, the researchers wrote in their study. The team identified the loop-de-loops of S2 after making more than 300 observations of the star using several instruments on the ESO’s Very Large Telescope in Chile.

Beyond adding one more log to the proverbial fire of Einstein’s legacy, the new finding could also help researchers make more exact calculations of the types and quantities of matter located at the center of the galaxy, the researchers said.

“Because the S2 measurements follow general relativity so well, we can set stringent limits on how much invisible material, such as distributed dark matter or possible smaller black holes, is present,” study co-authors Guy Perrin of the Paris Observatory and Karine Perraut of France’s University of Grenoble said in the statement. “This is of great interest for understanding the formation and evolution of supermassive black holes.”