Orangutans and otters strike up darling friendship at Belgium zoo

This furry friendship is an enrichment experience for both creatures. 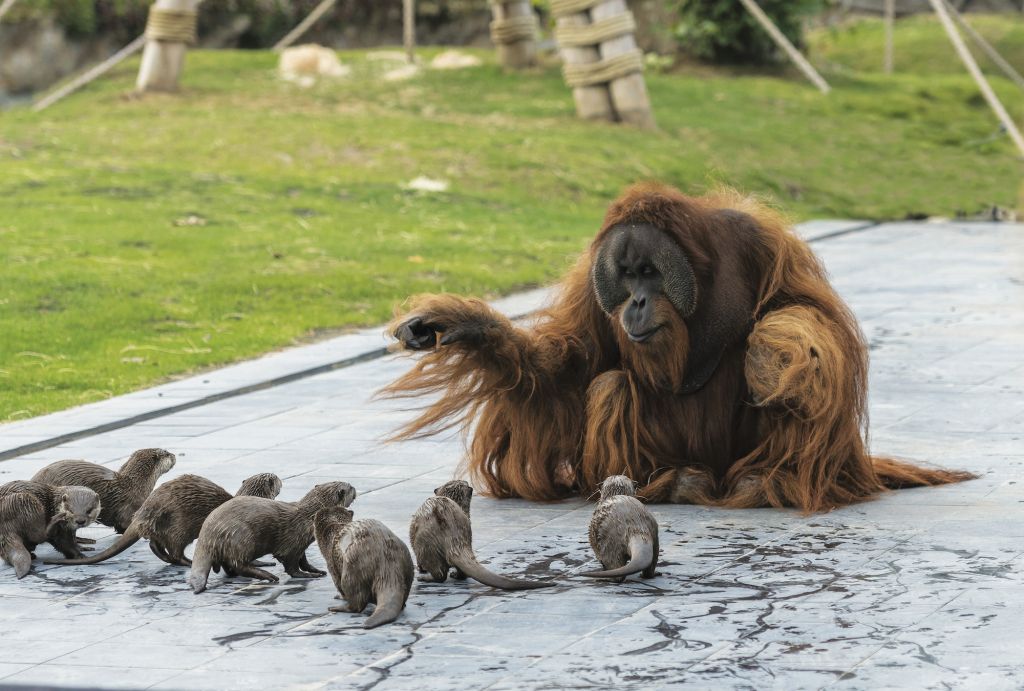 A family of orangutans and a romp of river otters are the furriest of friends, according to zookeepers in Belgium who purposefully arranged for the primates’ and mustelids’ habitats to intersect.

Photos of these curious bedfellows went viral after Pairi Daiza, a privately owned zoo and botanical garden located in Belgium’s province of Hainaut, recently posted them on Facebook.

“The presence of a family of Asian small-clawed otters in [the orangutans’] territories is not a coincidence,” Mathieu Goedefroy, Pairi Daiza spokesperson, told Live Science in an email. Orangutans (genus Pongo) share 97% of their DNA with humans, and like their Homo sapiens‘ cousins, orangutans “must be entertained, occupied, challenged and kept busy mentally, emotionally and physically at all times,” Goedefroy said.

So, the zoo chose to let the otter family (Amblonyx cinereus) live in the river that runs through the orangutan habitat.

“The otters really enjoy getting out of the water on the orangutan island to go and play with their big, furry friends,” Goedefroy said. “It makes life more fun and interesting for both animal species, which makes it a very successful experiment.”

The unlikely animal friends even warmed the heart of Harry Potter author J.K. Rowling, who tweeted: “Oh my god. My two favourite animals, together, having story time. And if you know this is photoshopped, don’t tell me, because I don’t want to know.”

The zoo has five orangutans: a male and female couple named Gempa and Sinta, as well as a family of three — the 24-year-old daddy Ujian, 15-year-old mommy Sari and their 4-year-old son Berani, who arrived at Pairi Daiza in 2017 after they moved from Heidelberg Zoo in Germany.

The father-son duo Ujian and Berani have already “developed a very special bond with their neighbors,” Goedefroy noted.

In addition to playing with their otter friends, the orangutans, a subspecies from Sumatra, have a number of other enrichment programs, “where our keepers entertain them all day long with mind games, riddles, puzzles and other stuff to train their intelligence,” Goedefroy said.

All three species of orangutan are critically endangered, according to the International Union for Conservation of Nature (IUCN). This includes the Bornean (P. pygmaeus) and Sumatran (P. abelii) orangutans, as well as the Tapanuli orangutan (P. tapanuliensis), which lives in the Batang Toru forests of Sumatra, Indonesia, and was confirmed as a distinct species in 2017. There are fewer than 800 known P. tapanuliensis orangutans in the wild, the IUCN reported.

In total, the orangutan population on Borneo and Sumatra stands at about 71,820 individuals, according to a 2016 report by the IUCN. These orangutans are endangered, in large part, because of deforestation (from palm oil exploitation in their forests) and poaching.

In the late 1990s, orangutans experienced catastrophic habitat loss in southern Borneo because of the Mega Rice Project. During this project, people tried to replace 2 million acres (1 million hectares) of forest with rice crops to help them achieve food self-sufficiency, according to Pairi Daiza’s website. However, the project didn’t work; no rice grew in the forest soil.

“While the project was quickly abandoned, the forest still bears the scars: It is impossible for the native vegetation to return to these dried-out lands,” Pairi Daiza said. The zoo has now raised funds to help plant 11,000 trees in the devastated forests of Borneo, Goedefroy said.