This Is ‘Lola,’ a 5,700-Year-Old Woman Whose Entire Life Is Revealed in Her ‘Chewing Gum’ 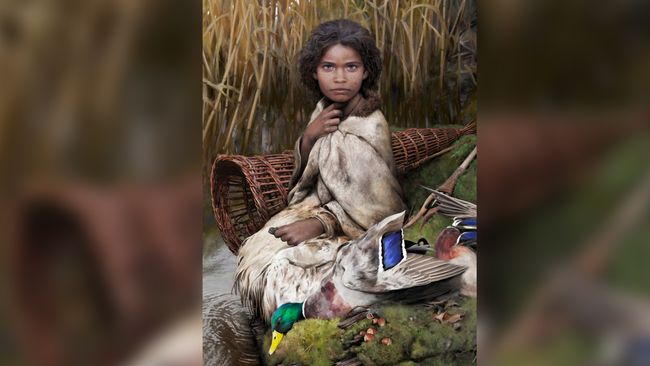 This is an artistic reconstruction of Lola, a 5,700-year-old woman whose appearance was reconstructed from DNA analysis of a chewed piece of birch pitch.
(Image: © Tom Björklund)

Thousands of years ago, a young Neolithic woman in what is now Denmark chewed on a piece of birch pitch. DNA analysis of this prehistoric “chewing gum” has now revealed, in remarkable detail, what she looked like.

The team nicknamed the young Neolithic woman “Lola” after Lolland, the island in Denmark on which the 5,700-year-old chewing gum was discovered. The Stone Age archaeological site, Syltholm, on the island of Lolland, pristinely preserved the gum in mud for the thousands of years after Lola discarded it.

It was so well-preserved that a group of scientists at the University of Copenhagen were able to extract a complete ancient human genome — all of the young girl’s genetic material — from it. They were also able to extract DNA from ancient pathogens and oral microbes that she carried in her mouth.

This is the first time that an entire human genome was extracted from something other than human bones, according to a statement from the University of Copenhagen. The team’s analysis revealed that the chewer of the prehistoric gum was female, and likely had dark skin, dark hair and blue eyes. They found that Lola’s genes matched more closely to hunter-gatherers from the European mainland than those who lived in central Scandinavia at the time.

The ancient chewing gum also held traces of plant and animal DNA, such as DNA from hazelnuts and duck, which might have been part of Lola’s diet, according to the statement. Finally, scientists found genes associated with “lactase non-persistence,” meaning Lola likely didn’t digest dairy very well.

Other previous archeological finds from the site had suggested “that the people who occupied the site were heavily exploiting wild resources well into the Neolithic, which is the period when farming and domesticated animals were first introduced into southern Scandinavia,” lead author Theis Jensen, a postdoctoral fellow from the Globe Institute at the University of Copenhagen, said in the statement.

Finally, the researchers found DNA from oral microbes in the chewing gum, including DNA that could belong to the Epstein-Barr virus, which causes mononucleosis, otherwise known as “mono” or the “kissing disease.”

The birch pitch is a blackish-brown substance that’s created by heating up birch bark. This substance has been used since the Paleolithic era as glue for hafting stone tools, according to the statement.

But previously, pieces of birch pitch have been found with tooth marks, so archeologists think that as the pitch cools and solidified, it was chewed to make it moldable again before using it to glue.

Other theories suggest that people chewed the slightly antiseptic birch pitch to relieve toothaches or other illnesses. Birch pitch might also have been used for toothbrushing, to suppress hunger or even just for fun as chewing gum, according to the statement.

Ancient “chewing gums” are a relatively new source of DNA to analyze, and can help reveal the microbiome of our ancestors. It may also help explain how bacteria and viruses have changed over time.

“It can help us understand how pathogens have evolved and spread over time, and what makes them particularly virulent in a given environment,” senior author Hannes Schroeder, an associate professor from the Globe Institute at the University of Copenhagen, said in a statement. “At the same time, it may help predict how a pathogen will behave in the future, and how it might be contained or eradicated.”

The findings were published on Dec. 17 in the journal Nature Communications.