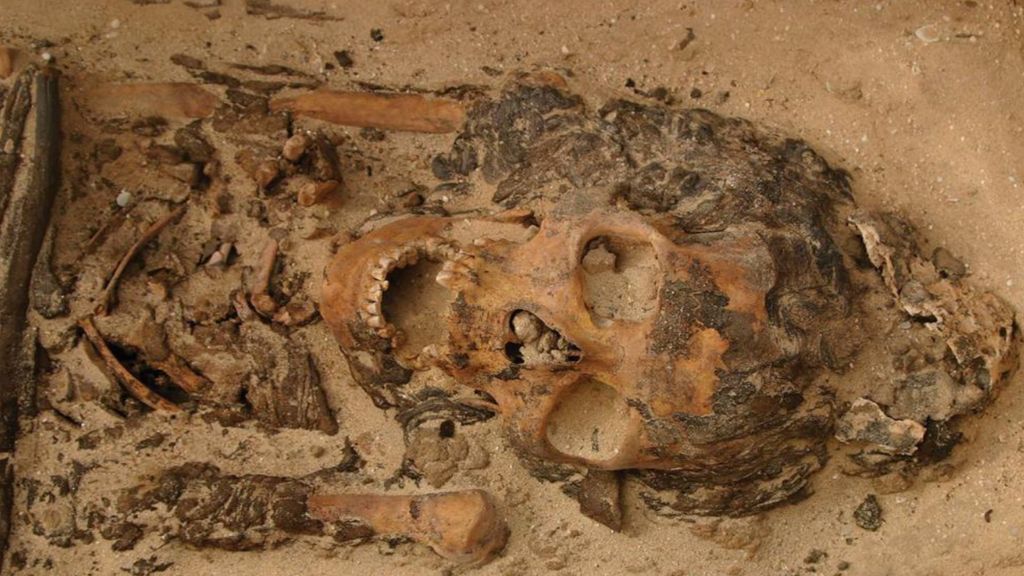 This woman was buried wearing a head cone in a cemetery at the site of Amarna in Egypt.
(Image: © Amarna Project)

Ancient Egyptians have long been depicted wearing so-called head cones, but until now, archaeologists had no physical evidence of their existence. Now, two such head cones, made of wax, have been discovered on the skulls of two individuals buried about 3,300 years ago at the site of Amarna in Egypt.

Between 1550 B.C. and 30 B.C., Egyptian art depicted people wearing what look like cones on their heads. Because no examples of these cones had ever been found, archaeologists wondered whether they actually existed or were an artistic motif that had no basis in reality (similar to people with halos over their heads depicted in Christian art).

This new discovery proves that the cones did exist, and provides information on what the cones were made of, a team of archaeologists wrote in a paper published Dec. 10 in the journal Antiquity.

The two cone-wearing individuals were found in separate plots in cemeteries at Amarna. One individual, a woman, was found in 2010; she had died when she was between 20 and 29 years of age. She had “long, thick braids featuring many extensions and end-curls” and “the cone was found in situ, placed on top of the head over the well-preserved hair,” the archaeological team wrote in the Antiquity article. The researchers noted that the “overall shape [of the cone] seems to be that of a low dome,” originally measuring about 3.1 inches (80 millimeters) high and 3.9 inches (100 mm) across.

Related: 10 Iconic Historical Hairstyles (And Why We Love Them)

The other person buried with a cone, found in 2015, was between 15 and 20 years of age when he or she died (the sex is not known). This individual appeared to have their “hair ended in open, probably unstyled curls,” with no braids, the archaeologists wrote, noting that the grave had been robbed at some point.

In both cases, the cones appear cream colored; spectroscopic analysis indicated that the cones were likely made of beeswax. Neither individual appears to have been wealthy; an evaluation of their bones suggested that they both did labor-intensive work and suffered from shortages of food at times in their life.

The purpose of the head cones is still a mystery. In artistic depictions, head cones “are often depicted as being worn by guests, both female and male, in banqueting scenes, including those honoring the dead, or by male tomb owners as they participate in funerary rituals, or are rewarded by the king,” the archaeologists wrote. The artistic scenes also showed people wearing cones while hunting, fishing, playing music or taking part in childbirth, the authors added.

“The nature and role of the cones have long been debated. The most enduring interpretation is that the cone is a lump of perfumed unguent that, as it melted, scented and cleansed the hair and body,” they wrote.

The new discovery, they said, makes this interpretation problematic, since the cones are made of beeswax, not unguent, and no perfume was detected in the team’s tests. Even so, the scientists noted that any perfume on the cones may have completely evaporated by now.

One possibility is that the two individuals buried with the cones had fertility issues, which the head cones were meant to treat in the afterlife, the archaeologists wrote. “Scholars often link the cones specifically with sensuality, sexuality and related notions, as they are frequently associated in imagery with women, sometimes unclothed,” they wrote. For instance, the cones have been depicted in scenes showing the fertility goddess Hathor. And in tomb scenes, they are often read as sensual motifs associated with the rebirth of the tomb owner, who is usually male,” wrote the archaeological team.

Lise Manniche, a professor emeritus of Egyptology at the University of Copenhagen who was not involved in the current study, agreed with the archaeologists that this is an important discovery. She thinks that cones made of unguent would have been used by the middle or upper classes, but that the two individuals found buried with the cones at Amarna couldn’t afford cones made of unguent and instead wore cones made of beeswax.

“I would interpret the two cones as ‘dummy cones,’ used by less fortunate inhabitants in the city as a substitute for the unguent cones of the middle and upper classes,” Manniche said, adding that “by using these dummies, they would have hoped to narrow the social gap in the next life.”

Nicola Harrington, an honorary research associate at the University of Sydney’s archaeology department, said that “it seems unlikely that the meaning [of the cones] can be tied to fertility and/or rebirth alone because one would expect more people — male and female — to be buried with them.”

Harrington, who wasn’t involved in the research, suggests that the cones may be “status markers of women who performed ritual dances for the king and his god, the Aten.” The injuries the two people with the cones had, stress/compression fractures of the mid-lower spine, are common among dancers, Harrington noted; and the cones could have “marked them as members of a community that served the gods.”

Both Harrington and Manniche have published articles in the past on head cones.