It’s one of the oldest swords ever found. 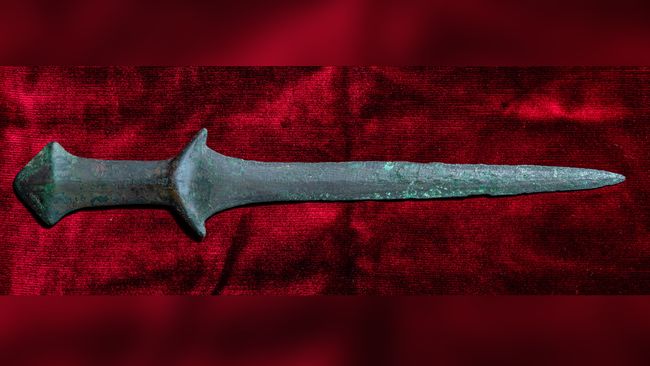 The sword was mistakenly thought to be medieval. It is now thought to come from eastern Anatolia and to be about 5000 years-old – one of the oldest swords ever found.
(Image: © Ca’ Foscari University of Venice/Andrea Avezzù)

A keen-eyed archaeology student made the find of a lifetime when she spotted one of the oldest swords on record, mistakenly grouped with medieval artifacts in a secluded Italian museum.

The ancient sword was thought to be medieval in origin and maybe a few hundred years old at most — but studies have shown that it dates back about 5,000 years, to what is now eastern Turkey, where swords are thought to have been invented, in the early Bronze Age.

The weapon was spotted in November 2017 by Vittoria Dall’Armellina, who was then a doctoral student in archaeology at Ca’ Foscari University of Venice. She had made a day trip to the monastery on San Lazzaro degli Armeni, a tiny island on the edge of the Venetian lagoon.

The visit had nothing to do with her studies, and she’d never been there before. “It was a pleasure trip,” Dall’Armellina told Live Science in an email.

When she spotted the sword among the medieval artifacts on display in the monastery’s small museum, Dall’Armellina was sure she’d seen its distinctive shape before, she said.

She’d written her master’s thesis on social status in the early Bronze Age, and her studies had included high-status grave goods, such as ancient weapons.

“I thought that I knew that type of sword and that I was certain it was contemporary with those of Arslantepe and Sivas,” she said, referring to swords from the east of Anatolia, now eastern Turkey, which date to about 3000 B.C. and are thought to be the oldest in the world.

Dall’Armellina and scientists from Ca’ Foscari University set out to find out more about the mysterious sword.

They contacted the monastery at San Lazzaro degli Armeni, which has been a center for the Mekhitarist congregation of Armenian Catholic monks since 1717.

Research into the monastery’s archives by Father Serafino Jamourlian revealed that the sword had been sent in a donation of gifts from an Armenian art collector named Yervant Khorasandjian, to a monk named Ghevond Alishan, known as Father Leonzio, about 150 years ago.

Alishan was a famous poet and writer who was a friend of the famed English art critic John Ruskin; Alishan died in 1901, and his belongings passed on to his monastery.

According to a document that accompanied the donation, handwritten in Armenian and dating from the second half of the 19th century, the sword was found at Kavak, a settlement near the  ancient Greek colony of Trebizond on the Black Sea coast now Trabzon in eastern Turkey.

After Alishan’s death, the sword found its way into the monastery’s museum, where it was eventually placed in a cabinet of medieval artifacts.

It’s taken more than two years of detailed study, including metallurgical research, to verify that both the construction and composition of the sword are similar to those of the ancient swords found in eastern Turkey. In the meantime, Dall’Armellina has now completed her archaeology doctorate.

One of the surprises is that the weapon is made of arsenical copper, an alloy of copper and arsenic used about 5,000 years ago, before true bronze was invented by alloying copper and tin.

“I was pretty sure of the antiquity of the sword,” Dall’Armellina said. But “when the results of the analysis revealed that the material was arsenical copper, it was a great satisfaction.”

The style of construction of the sword, known as its typology, and its metallic composition indicate that the artifact dates from an early stage of the Bronze Age.

The researchers also found that the sword was constructed in a similar way to that of the twin swords found at the ancient palace at Arslantepe, an archaeological site in eastern Turkey. Those have been firmly dated to about 5,000 years ago, according to a statement by the university.

Archaeologists think swords were invented in that region, and the sword from San Lazzaro degli Armeni is now thought to be an early example — perhaps even the oldest.

Similar ancient swords have been found in eastern Anatolia, while a different style of sword from the same period has been found in barrow graves, known as kurgans, in the adjoining northern Caucasus region, Ca’ Foscari University archaeologist Elena Rova told Live Science.

“It seems that in this area, between the northern Caucasus and eastern Anatolia, the sword was invented, and there were at least two typological variants,” Rova said.

“Local chiefs were buried with a lot of weapons and other precious objects,” she said. “They probably wanted to emphasize their status as warriors, and the sword was one of the symbols.”