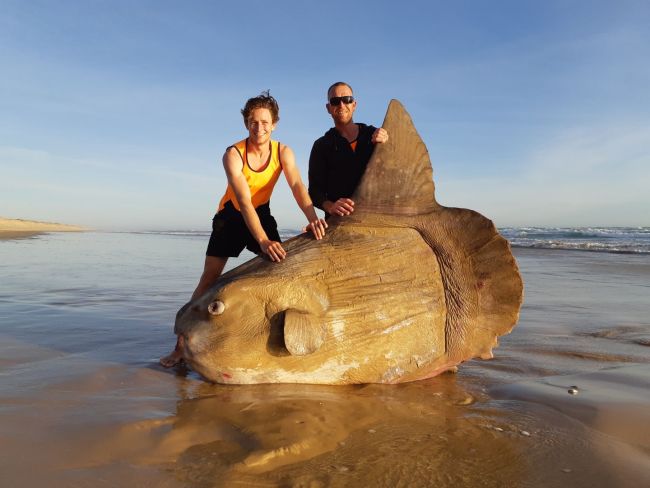 When they spotted the ocean sunfish at the mouth of the Murray River in South Australia, the animal’s discoverers thought it was driftwood.
(Image: © Linette Grzelak)

When a group of Aussies spotted the behemoth on the beach, they initially thought it was a rugged piece of driftwood. Upon closer inspection, however, they realized it was the body of an enormous, bony fish.

That’s how they came face to face with the mighty ocean sunfish, known to scientists as the Mola mola. These fish can grow up to 11 feet (3.3 meters) long and weigh up to 2.5 tons (2.2 metric tons), according to National Geographic.

Linette Grzelak, whose partner, Steven Jones, sent her a photo of the dead fish, related that he “said it was extremely heavy and the skin felt hard and leathery like a rhinoceros.” [In Photos: The World’s Largest Bony Fish]

Jones is a supervisor of a cockle-fishing crew, which drives that stretch of beach for work. “I’m always getting sent photos of what they find, but it’s mostly sharks and seals,” Grzelak told Live Science. “Saturday night [March 16], I got sent the sunfish and thought it was fake. I had no idea what it was.”

These fish are rarely seen in that neck of the woods, in South Australia at the mouth of the Murray River, which is the longest river in Australia. But M. mola fish have a wide range; they’re known to live all over the world, mostly in temperate and tropical waters.

Despite their size, ocean sunfish do not prey on humans. Instead, they feast on small and soft animals, like jellyfish and zooplankton, according to a 2010 study in the journal Reviews in Fish Biology and Fisheries. However, Jones said he “has heard stories over the years about sunfish sinking yachts in races and the damage they do to boats,” Grzelak noted.

In addition to their impressive dimensions, ocean sunfish are recognizable for their wide eyes, which make them look like they’re constantly startled, and their tall fins are often mistaken for those of sharks when they breach the water’s surface, according to Two Oceans Aquarium in Cape Town, South Africa. In addition, they lack a true tail, researchers reported in 2008 in the journal PLOS One.

After the cockle-fishing crew found the sunfish, they took photos that were later posted to iNaturalist, a crowdsourcing site that scientists use to identify species. The consensus was that the fish was an ocean sunfish.

However, the fish is now lost to the sea. The crew didn’t have time to save the deceased animal’s body, because they were working. Moreover, that stretch of beach is accessible only by boat, is a low-traffic site that is mainly visited only by fisheries and doesn’t have cellphone reception. So, the team couldn’t call anyone to collect the fish before it was washed back to sea by the tide, Grzelak said.

Given that there weren’t any visible signs of damage on the fish, “there is the assumption that it died of either natural causes, eating too much plastic or parasites,” according to scientists who consulted with the team about the fish, Grzelak said.

Another species of sunfish made the news a few weeks ago, too; a hoodwinker sunfish (Mola tecta), a species discovered by scientists in 2017, washed ashore near Santa Barbara, California, thousands of miles from its known home in the Southern Hemisphere.