This newly discovered Maya kingdom wasn’t powerful, but its allies may have kept it safe. 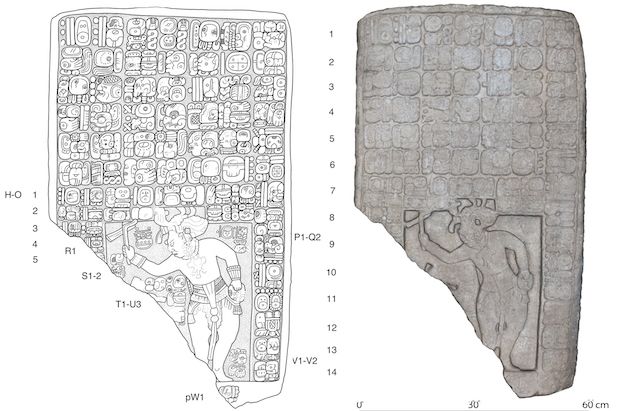 After searching for more than a quarter century, archaeologists may have finally located the capital city of Sak Tz’i’, a Maya kingdom that’s referenced in sculptures and inscriptions from across the ancient Maya world. But it wasn’t archaeologists who made the find. A local man discovered a 2- by 4-foot (0.6 by 1.2 meters) tablet near Lacanja Tzeltal, a community in Chiapas, Mexico.

The tablet’s inscriptions are a treasure trove of mythology, poetry and history that reflect the typical Maya practice of weaving together myth and reality. Various sections of the tablet contain inscriptions that recount a mythical water serpent, various unnamed gods, a mythic flood and accounts of the births, lives, and battles of ancient rulers, according to a news statement from Brandeis University in Massachusetts.

Sak Tz’i’ sat on what’s now the border between Mexico and Guatemala, and it probably wasn’t an especially powerful kingdom, Charles Golden, an associate professor of anthropology at Brandeis University, said in the statement.

Despite being surrounded by stronger neighbors, evidence suggests that the kingdom’s capital city was occupied for more than a millennium after being settled in 750 B.C. The kingdom’s longevity may be due to the fortifications that surrounded its capital city. The researchers found evidence that the city was protected by a stream with a steep ravine on one side and defensive masonry walls on the other.

The team members added that the kingdom may have benefitted from forming strategic peace deals with its more powerful neighbors. Even though this kingdom never achieved great power, “Sak Tz’i’ was a formidable enemy and an important ally to those greater kingdoms, as evidenced by the frequency by which it appears in texts at those sites,” the researchers wrote in the study, published online in December 2019 in the Journal of Field Archaeology.

That said, the kingdom experienced conflict, both with its neighbors and from nature, the archaeological record suggests. For instance, there’s a figure of a dancing ruler carved into the bottom of the tablet. This ruler is dressed like the god Yopaat, who is associated with violent tropical storms. The figure holds a lightning-bolt ax in his right hand and a stone weapon used in ritual combat in his left hand.

What’s more, the researchers found another sculpture at the site that appears to tell of a fire that destroyed part of the city during a violent conflict with one of its neighbors.

Since excavation began in the summer of 2018, the researchers have identified several structures that offer insight into political, religious and commercial life in the kingdom. These include the remains of pyramids, a royal palace and a ball court.

One of the capital’s most striking features, the ruins of a pyramid that once stood 45 feet (14 m) tall, is surrounded by structures that might have served as houses for elites and religious rituals, the researchers said. The pyramid also has a number of stelae (carved stone slabs) around it, including one showing the soles of nobles’ feet facing outward toward the viewer, “an unusual depiction otherwise featured only on a few Maya vases,” the researchers wrote in the study.

In addition, the researchers uncovered a 1.5-acre (0.6 hectares) courtyard called the Plaza Muk’ul Ton, or Monuments Plaza, where people gathered for religious and political ceremonies.

The discovery marks a major step forward in the study of the ancient Maya world. The researchers hope further analysis of the site’s architecture and detailed inscriptions will offer new insight into the politics, economy, rituals and warfare of the Maya civilization’s western regions. Going forward, the archaeologists plan to use lidar — or light detection and ranging — a tool that uses lasers and can be mounted on an airplane or drone to discover architecture and topography hidden under the dense jungle canopy.

The team is especially interested in how kingdoms such as Sak Tz’i’ managed to survive for so long, despite apparently never becoming as powerful as rival kingdoms in the region.