Do you know what makes tribal Borneo women beautiful?

When people talk about beauty, what comes to mind? Generally, its fair skin, long legs, silky hair, and pointed noses. Western media has done a lot to influence what we think is beautiful. Yet if we look past this bias, we find that not everyone has the same beauty ideals.

In Sarawak indigenous beauty is far different from the Eurocentric beauty standards. What makes an indigenous Sarawakian woman beautiful may be seen as ‘savage’ by many today because of our heavily Westernised interpretation of beauty. However, once upon a time, these beauty marks were highly sought after in their own communities. They are still appreciated today, despite the fact that many indigenous women no longer adhere to them.

Many of these beauty marks will sadly fade in time as modern-day life dictates a more practical approach. Before that happens, we’ve put together a list to remind us that beauty always lies in the eyes of the beholder.

So, in conjunction with International Women’s Day, we’re taking the opportunity to share with the world the unique beauty marks of Sarawak’s indigenous women.

In the region of Bengoh, 400 meters above sea level, lies a quaint village called Kampung Semban. As this village is nestled in the mountains, it is no wonder that it is nicknamed “the village above the clouds”.

The Semban people are a sub-tribe of the Bidayuhs. What sets them apart are the copper-coiled rings that adorn the forearms (ruyang) and calves (rusung) of their women. As of 2020, five women were recorded still wearing these rings, wherein only 4 are still active, which makes the ringed ladies of Semban an extremely rare sight.

Many centuries ago, Semban ladies started wearing these rings from as young as 10 years old. Even though the practice was not imposed on them, the girls chose to wear rings because according to pagan customs, only girls with the rings were allowed to attend festive ceremonies and dance, and who wants to miss a dance?

Wearing these rings made the young Semban ladies more beautiful. They are never taken off, even while doing daily chores such as tending the fields or taking showers. As a result, wearing them can be painful. However, to the Semban women, it was worth the pain because beauty precedes everything. And because the rings made them more beautiful, it also made it easier for them to find husbands.

The practise of wearing these rings slowly faded when formal education was introduced to the village in 1969. Girls were not allowed to wear them to school and because of this, many chose to take them off or not wear them at all after school or at weekends and during the holidays.

The older generations of Semban still find these rings attractive but the younger generation does not and it’s only a matter of time before the practise dies out.

Long Ears of the Orang Ulu

The longer the earlobes, the more beautiful they are. This is what the traditional Orang Ulu believe. To them, long earlobes accentuate a woman’s beauty and will attract more men to marry them. Back in the olden days, it was common to see women of Orang Ulu walking around Sarawak with long earlobes.

The Orang Ulu consists of the Kayan, Kenyah, Kelabit, Lun Bawang, and many other small tribes, commonly live in the lower-lying inland areas of northeastern Sarawak.

Using sharpened bamboo sticks, parents would pierce their children’s ears at just a few months old. After piercing, they wear brass earrings to elongate their earlobes. As they grow older, these brass earrings are replaced with heavier ones, weighing up to 500 grams a pair. These earrings then stretch out the earlobes, preferably reaching their shoulders and beyond.

This process is painful and their ears may even bleed and become infected. However, according to those who went through the process, the feeling of getting their earlobes to reach their shoulders left them elated. 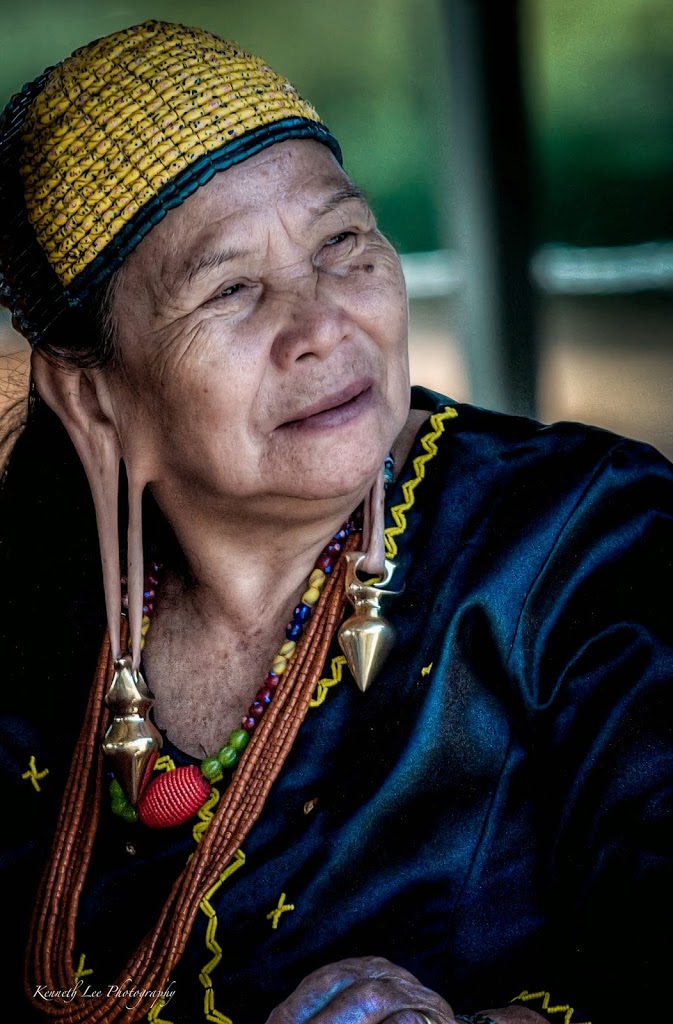 Elongated earlobes are a symbol of beauty to the wearer. It is also said that the longer the earlobes are, the more significant the individual is to the tribe.

Sadly, with modernisation, the younger generation no longer practices this tradition. The elders do not blame their grandchildren for refusing to follow in their footsteps as they need to assimilate with the city and such signs of beauty don’t sit well with modernity.

Flat Foreheads of the Melanau women

Once upon a time, the Melanau people of Mukah and Bintulu deemed round faces as beautiful. Parents went to great extremes to get their children to grow up looking “moon-faced”.

To achieve this desired feature, a young infant had to go through ‘melipih beleang’, a process that flattens their foreheads with a device called ‘jak’.

The jak is a flat wooden bar that is 24cm long and 9cm wide. A soft pad is then attached to the centre of the bar, which is placed in the middle of the baby’s forehead. This is connected to a T-shaped strap of cloth with strings. These strings are then guided into a hole in the middle of a copper coin or a wooden disc.

This contraption is then strapped around the heads of infants while they sleep. By twisting the coin or disc, pressure is gradually applied to the babies’ foreheads. If the baby woke up or started crying, pressure would slowly be released. Each application usually lasts for 15 minutes and it takes between 10 to 20 uses of the jak to achieve the desired ‘moon-face’ effect.

Mothers will start using jak on their infants when they are as young as two weeks old because their bones are still quite malleable. Even though this process is painful and dangerous, the girls won’t remember the pain as they were too young when they went through it.

The Melanau people believe that round faces have the perfect head shape to don the serebang (golden tiara).

Tattooed women of the Kayan Tribe

Even though many tribes don tattoos, in the Kayan tribe, it was mostly the women who got them. These tattoos are called ‘tedek’. Girls would get tattooed as young as ten years old, and it was considered a rite of passage into adulthood.

The Kayan tribe are mainly settled along the Baram, Bintulu, and Rajang River in Sarawak.

The tattooing process begins with the girl’s fingers and the upper part of her feet. Within a year, her upper arms and thighs would be covered. It can take up to four years to complete the whole tattooing process, depending on the woman’s endurance level to pain. Only once her tattoos are complete can she be eligible for marriage.

The more tattoos a woman has, the more beautiful she is considered to be. Tattoos symbolise their identity, courage, beauty, and social status. The Kayan also believe that these tattoos will become their guiding lights in the darkness of the afterlife.

After the arrival of missionaries into Sarawak, there was a negative connotation attached to tattoos, mainly because of the influence of Abrahamic religions. However, recently there has been a resurgence of the tattoo culture led by younger generations who modernise traditional motifs to assimilate with the current world. If you’d like to learn more about the significance and symbolism of tribal tattoos in Sarawakian culture, you can read our article here.

What people may deem as a ‘thing of the past’ still holds a lot of cultural significance. Even though we see less of these beauty marks today, their allure remains alive in the eyes of many elder Sarawakians.

They are also deeply appreciated by the younger generations who are putting a lot of effort into keeping their culture and heritage alive through stories and art.