These bones likely came from an old graveyard that was cleared hundreds of years ago. 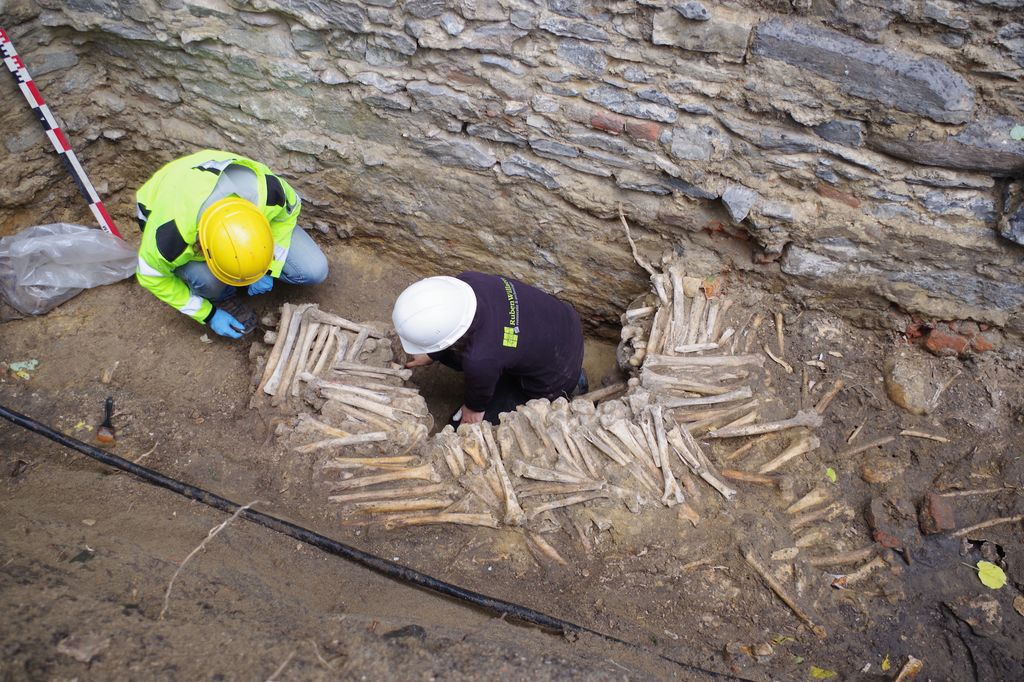 A series of nine walls were made largely with long bones from legs and skulls.
(Image: © Copyright Ruben Willaert bvba)

Archaeologists recently discovered walls built from a macabre material: human bones, including shattered skulls, while excavating the grounds of a church in Ghent, Belgium.

By the end of the excavation, archaeologists had uncovered nine walls, built mostly with adult thighs and shin bones. The intermediate zones were filled with skulls, many of them fragmented, according to Ruben Willaert, Restoration & Archeology / Decoration, the Dutch company that found the walls during an excavation ahead of construction for a new visitor’s center at the cathedral.

These ghastly structures were likely the work of people who, hundreds of years ago, cleared out an old graveyard to make room either for new bodies or a church renovation, said archaeologist Janiek De Gryse, on staff at Ruben Willaert and the excavation’s project leader.

“When clearing a churchyard, the skeletons cannot just be thrown away,” de Gryse told Live Science in an email. “Given that the faithful believed in a resurrection of the body, the bones were considered the most important part.”

Safeguarding human remains was so important that sometimes stone houses were “built against the walls of city graveyards to house skulls and the long bones in what is called an ossuary,” de Gryse said.

The bone walls were discovered on the north side of Saint Bavo’s Cathedral, formerly known as the Church of St. John the Baptist, or St. Jan. Radiocarbon dating of the bones suggests they date to the second half of the 15th century, but the walls were likely constructed later, in the 17th or early 18th centuries, de Gryse said.

Historical documents support these dates. One source notes that the church’s cemetery was cleared during the first half of the 16th century and again, after 1784, when the cemetery stopped taking new bodies.

No matter the date, these walls are a one-of-a-kind find.

“We don’t have any comparison in Belgium,” de Gryse said. Most historical graveyards consist of large pits or layers filled with loose human bones. “We have never seen structures, like walls, which are intentionally built with human bones,” de Gryse said.

Whoever made the walls must have been in a hurry, because they didn’t bother to collect small or fragile bones, such as vertebrae, ribs or bones from the hands or feet. Curiously, archaeologists haven’t found any arm bones, either.

“The walls consist only of bones from the lower limbs,” de Gryse said. “At the moment we are still examining which idea caused this. Is it only a practical thing (piling up bones in a very compact way) or is there also a religious/spiritual dimension?”

While there are bones from both adult men and women, children’s bones appear to be absent from the walls, which conflicts with the known life expectancy from that time period, when children often died of disease.

“But [it] is typical of bones from cleared tombs,” according to a statement from Ruben Willaert (translated from Dutch with Google translate). “Children’s bones are small and fragile, so they were not collected.”

For now, the bones are getting a new home at the University of Ghent, where they will be examined as part of a detailed inventory, de Gryse said.