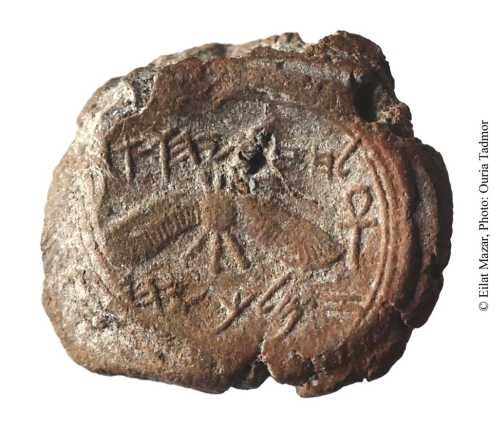 The seal of the Biblical King Hezekiah was recently unearthed on a trash heap. The seal shows a winged sun with two life symbols, called ankhs, on either side.
(Image: © Courtesy of Dr. Eilat Mazar; Photo by Ouria Tadmor)

The royal seal of an ancient biblical king has been unearthed near the Temple Mount in Jerusalem.

The seal, a clay impression depicting a two-winged sun with two ankh symbols on either side, was once used to seal papyrus documents associated with King Hezekiah, who ruled the kingdom of Judea from 727 B.C. to 698 B.C. The seal was unearthed in a trash heap near the walls of the ancient Temple Mount.

“Although seal impressions bearing King Hezekiah’s name have already been known from the antiquities market since the middle of the 1990s — some with a winged scarab (dung beetle) symbol and others with a winged sun — this is the first time that a seal impression of an Israelite or Judean king has ever come to light in a scientific archaeological excavation,” Eilat Mazar, an archaeologist at the Hebrew University of Jerusalem who led the excavations, said in a statement. [The Holy Land: 7 Amazing Archaeological Finds]

King Hezekiah is one of the most famous of the Israelite kings. During his reign, he rooted out idol worship, spruced up the decrepit temple and centralized power, as told in biblical accounts.

The team found the seal while sifting through archaeological remains from a trash heap found outside what was once the Royal Building, essentially the food pantry for the ancient kingdom.

When the researchers took a closer look, they realized the item was a seal with the following inscription: “Belonging to Hezekiah, [son of] Ahaz, king of Judah.”

The seal measures about 0.5 inches (1.3 centimeters) across and bears the imprint of the ring that would have encircled the seal of soft clay. While similar seals have cropped up in local markets for two decades, this is the first time an official excavation has uncovered a seal from Hezekiah’s reign.

The winged-sun imagery suggests the seal came from later in Hezekiah’s rule. Earlier in his reign, Hezekiah used a scarab, or beetle, which was a typical symbol of power in the Middle East at the time. But in later life, he turned to the winged-sun imagery, which represented the protection and refuge of God. Other kings, such as the Assyrians, also employed this symbol, and Hezekiah’s interactions with the Assyrians could have influenced his choice, the researchers wrote in a statement.

While the king’s jars used a symbol of the winged creature with arms extended, the king’s personalized seal depicted those wings turned downward, with the ankh symbols at either end.

The researchers hypothesize that this transition occurred after Hezekiah was struck by a mortal illness. Hezekiah faced a near-certain death from something called “shehin” (which a 2002 study in the Hebrew journal Harefuah suggested was actually anthrax). Hezekiah prayed to God, recovered and went on to live another 15 years, biblical accounts state. His brush with death may have made the ankh symbols, which represented life, even more significant to the Judean king, the researchers wrote in the statement.