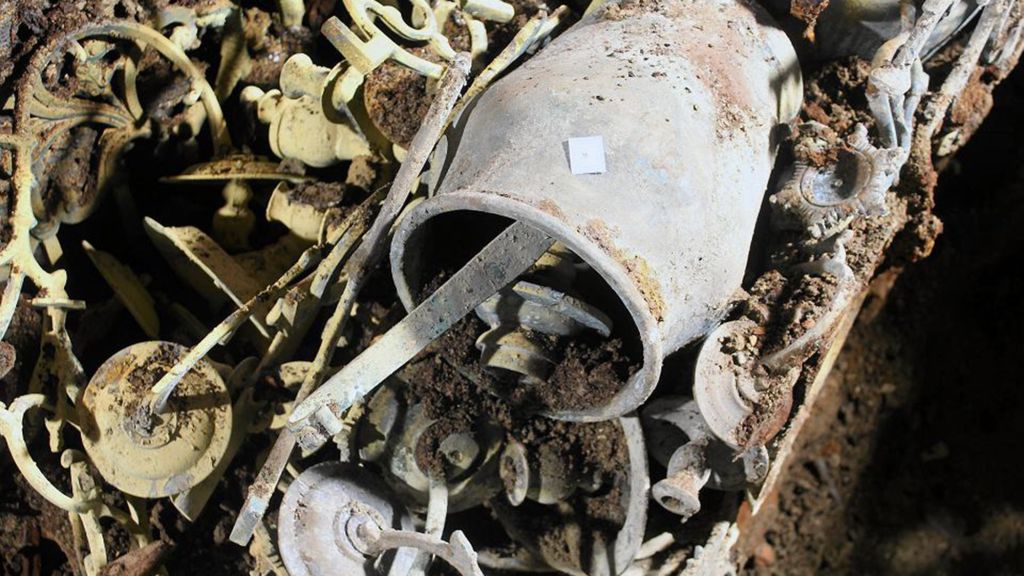 Inscriptions on religious artifacts could reveal the identities of Jewish people who donated the objects to the synagogue.
(Image: © Michał Wojenka)

A historic synagogue near Kraków, Poland, was mostly destroyed by Nazis during World War II, but a secret hoard of precious ritual objects that was hidden there remained undetected and undisturbed — until now.
Recently, restorers at the Old Synagogue, an 18th-century temple in Wieliczka, Poland, unexpectedly found a cache of Jewish artifacts and other silver items in a large, wooden crate that had been concealed under the floor. They uncovered the crate while digging a hole to test the soundness of the building’s foundation, the Jewish Chronicle reported.

The box — which measures about 3 feet high, 2 feet wide and 4 feet long (80 by 70 by 130 centimeters) — was crammed with around 350 objects, including a silver goblet with flowery designs, bronze vases inscribed with Hebrew writing and silver-plated candlesticks, according to the Chronicle.

Also among the artifacts were two menorahs (nine-armed candelabras that are lit during Hanukkah), two rimonim (decorative ornaments that crown a Torah scroll) and an ornate silver plaque that hung at the front of a Torah, Polish news outlet Gazeta Wyborcza reported. On the plaque were raised images of lions on pillars holding a crown over the Ten Commandments, and an attached silver chain led to a yad, a ritual pointer used for reading the Torah.

Time had rotted the wooden frame of the hidden box, but the objects inside, packed tightly together, were in good condition. Most of them are thought to date to the 19th century and would have been used in religious rituals, though there were some unusual exceptions: 18 badges from military caps of infantry officers in the Austro-Hungarian army. The badges bore the initials of Austro-Hungarian emperor Franz Joseph, who ruled from 1848 until 1916, according to Gazeta Wyborcza.

One possible explanation is that military caps were used to line the box and protect the ritual objects at the time when they were packed up and buried. But the fabric later rotted away, leaving only the badges behind, Michał Wojenka, a researcher with the Jagiellonian University Institute of Archaeology and leader of the investigation of the artifacts, told Gazeta Wyborcza.

When the box was hidden and who concealed it remain unknown. However, further investigation of the religious artifacts could reveal clues about individuals in Wieliczka’s Jewish community, as ritual objects are often inscribed with the names of the people who donated them, according to the Chronicle.

Approximately 1,135 Jews lived in Wieliczka according to records from the 1920s, but most of the community was deported and murdered during World War II, and few who survived returned to the city after the war ended, the Chronicle reported.