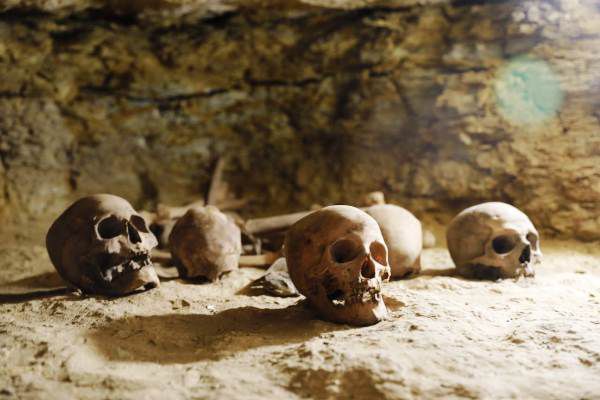 Several skulls were found in the burial ground. These would likely be from mummies that have not survived intact.
(Image: © Egyptian Ministry of Antiquities and Tourism)

A massive burial ground holding the remains of several high priests of ancient Egypt, along with their assistants, has been discovered in the northern part of the site of Tuna el-Gebel, Egypt’s antiquities ministry announced Thursday (Jan. 30).
So far, the archaeologists have unearthed 20 stone sarcophagi (coffins) made of a “very good quality of limestone” in the burial ground, which lies about 170 miles (270 kilometers) south of Cairo, said Mostafa Waziri, the general secretary of Egypt’s Supreme Council of Antiquities, during a news briefing.

In addition, the burials together contained some 700 amulets, some made of gold or precious stones, along with more than 10,000 shabti figurines made of faience (a glazed ceramic), Waziri said. The ancient Egyptians believed that shabti figurines served the deceased in the afterlife.

Related: See Photos of the “Cachette of the Priests” from Luxor

The archaeologists said they aren’t sure how many mummies are buried at the site. But given that many of the stone sarcophagi have yet to be opened, it is likely that many will be discovered, the researchers said.

The high priests buried at the site date to what archaeologists call the “Late Period,” a time when ancient Egypt was often struggling to achieve independence from foreigners, including the Nubians, Assyrians and Persians. The earliest Late Period burials found to date are from the 26th dynasty (688 B.C. to 525 B.C.), a time when Egypt had regained its independence after the Nubians had ruled it.