Ancient, Gold-Lined Tombs That May Hold Princesses Discovered in Greece 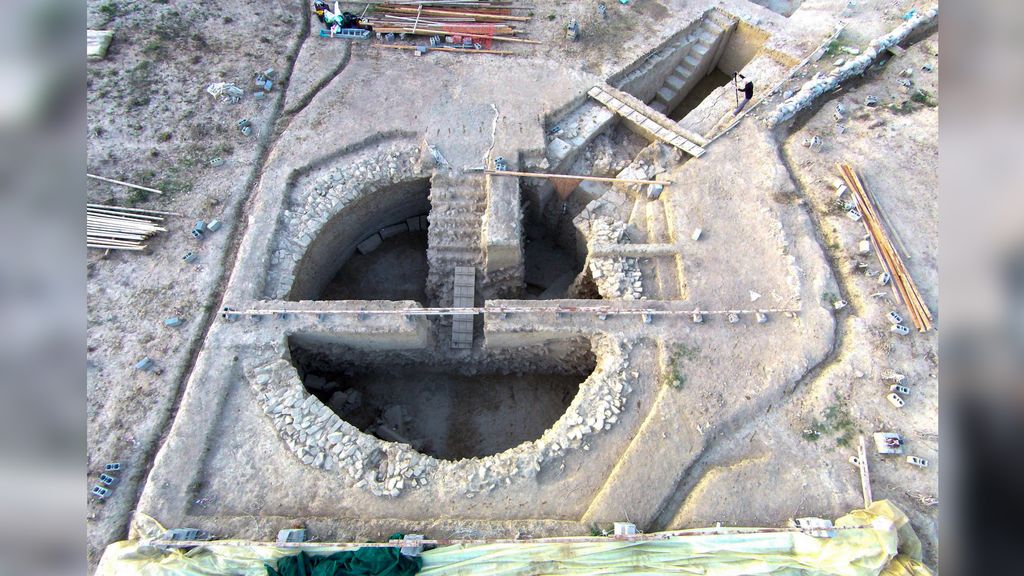 Here, one of the 3,500-year-old tombs discovered in Greece. It was covered with watermelon-sized stones when archaeologists found it.
(Image: © University of Cincinnati)

The bodies of ancient princes and princesses may have rested in two ancient tombs lined with gold that were recently found at the site of Pylos in Greece, archaeologists announced Dec. 17.
Inside the 3,500-year-old tombs, the archaeologists found intricately carved jewelry and human remains, though they can only speculate as to whether the bodies belong to royalty.

The archaeologists also can’t say how many bodies are buried in the tombs, or anything about their sex and ages, since their analysis of the human bones is ongoing, they noted.
Related: Photos: Mysterious Ancient Tomb in Amphipolis.

The tombs were found near what modern-day archaeologists call the “Palace of Nestor,” which was discovered in 1939, and near another tomb, found in 2015, that also contained elaborate jewelry.

When the archaeologists found the tombs, they were sealed beneath 40,000 stones about the size of watermelons. That covering was meant to protect the tombs from grave robbers — a danger in both ancient and modern times.

When the researchers excavated the tombs, they found a heap of gold leaf that had fallen from the walls of the tombs.

Golden walls were just some of the bling found in the burials. For instance, a gold ring found in one of the tombs depicts two bulls surrounded by sheaves of barley. “It’s an interesting scene of animal husbandry — cattle mixed with grain production. It’s the foundation of agriculture,” Jack Davis, a classics professor and archaeologist at the University of Cincinnati, who is co-director of the team that discovered the tombs, said in a statement.

Another intricate piece of jewelry in the tombs, an agate sealstone, depicts two lion-like creatures called “genii,” which are shown standing upright on clawed feet. The lions are carrying an incense burner and serving vase that they are giving as tribute to an altar decorated with a sapling tree and two horns, Sharon Stocker, a senior research associate at the University of Cincinnati, who is co-director of the team, said in the statement. Above the image of the lions is a 16-point star.

A gold pendant found in one of the tombs seems to have played some sort of protective role, as it depicts the Egyptian goddess Hathor. “Its discovery is particularly interesting in light of the role she played in Egypt as protectress of the dead,” Davis said in the statement.

Many more artifacts made of gold, carnelian, amethyst and amber were discovered in the tombs and are in the process of being analyzed. The artifacts shed light on trade between the Mycenaeans and other regions, as archaeologists found that the amber originated in the Baltic, while the amethyst hailed from Egypt.

The team plans to continue work in the area for at least another two years.