After a brutal clash between two clans in Scotland, six skulls were buried together. 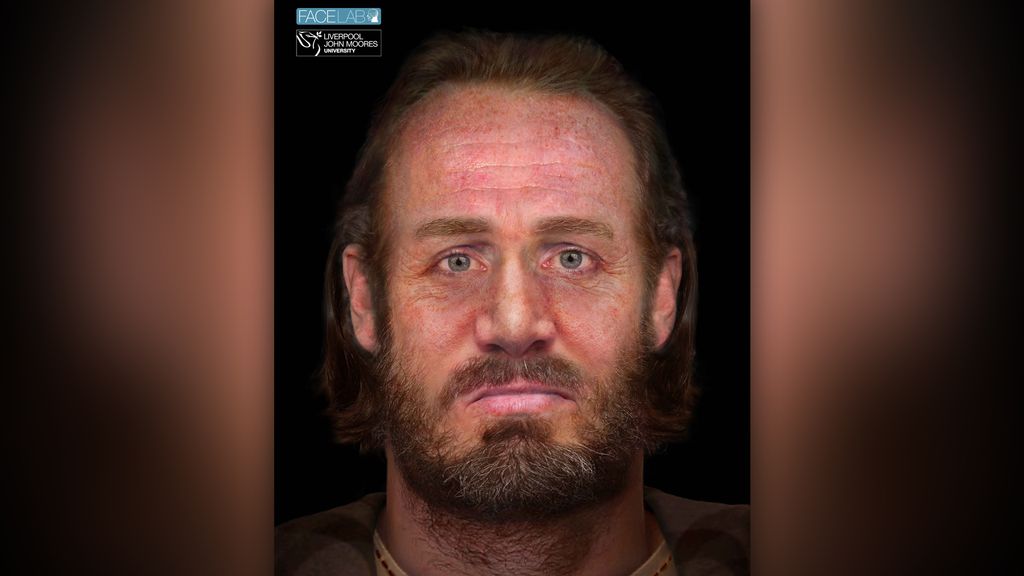 The face of a man who was part of a “six-headed” burial in the Scottish Highlands in the 15th century has been reconstructed by experts as part of the Tarbat Medieval Burials project.
(Image: © Image courtesy of Face Lab, Liverpool John Moores University )

Some say that two heads are better than one, but a grave in the Scotland Highlands dating to the 15th century held several heads too many.
Archaeologists counted six skulls in the grave when it was uncovered in 1997 at St. Colman’s Church in the fishing village of Portmahomack. Buried inside were two complete male skeletons and four additional skulls; this highly unusual “six-headed” burial likely held powerful members of a local clan, experts told Live Science.

Now, researchers are offering a glimpse at what one of those men may have looked like in life. Forensic experts recently reconstructed the craggy, freckled face of an occupant of that crowded grave, creating a highly detailed and glowering visage that included a generous, ginger neck beard.

The two complete skeletons in the grave likely belonged to successive clan chiefs, possibly killed during clashes with a neighboring clan, archaeologist Cecily Spall told Live Science in an email. Spall is a scientist with Field Archaeology Specialists (FAS) Heritage, a private company investigating historically significant sites. FAS and the University of Bradford in England have spent several years excavating St. Colman’s Church and the surrounding area, as part of the Tarbat Discovery Programme, according to the project website.

The grave was centrally located inside the ruins of the church near the entrance; this position hinted at the importance of the people who rested within the burial, FAS Heritage representatives said in a statement. St. Colman’s Church burned down sometime in the late 1400s, around the same time as a battle between the Ross and MacKay clans. The men in the grave may have lost their lives — and in some cases, their heads — during the conflict between those clans, the statement said.

Between 1994 and 2007, archaeologists at the site excavated 88 skeletons belonging to men, women and children. One group of bodies dated to between the 13th and 14th centuries, and another group was laid to rest during the 15th and 16th centuries, according to a report published in 2016 by the Society of Antiquaries of Scotland.

Initially, the grave held just one complete skeleton, which lay on its back, that of a man who had suffered terrible sword wounds to his face. In fact, one of his injuries was so dire that it had nearly separated the man’s jaw from his head, Spall said. Four skulls without their lower jaws were arranged in the grave around the man’s head, though researchers don’t know if these belonged to family, friends or foes of the man.

Then, “perhaps a generation later,” the coffin was opened and the body of another man was added, researchers wrote in the report.

“The skull of the first man was moved to the foot of the coffin to make way for the second man’s head, which was then also surrounded by the extra skulls,” Spall said.

Researchers said that both of the men in the grave were likely between the ages of 46 and 59 years old when they died; burial rituals and the arrangement of these skeletons along with other bodies nearby suggest that the grave belonged to “a prominent family,” according to the report.

Scientists with Face Lab at the Liverpool School of Art and Design digitally modeled the face of the grave’s second clan leader. They sculpted his features by first calculating the average depth of facial soft tissue from datasets of modern European faces, Ching Yiu Jessica Liu, a Face Lab project manager, told Live Science in an email.

The researchers then used high-resolution facial textures to craft individual features “based on the morphology of the skull,” Liu said.

Further investigation of the six-skull burial will use techniques such as radiocarbon dating, DNA analysis and stable isotope analysis to uncover more clues about the burial, “including the date of both interments, the date(s) of the extra skulls, possible familial connections or shared ancestry, and physical appearance,” Spall said.