In Images: Rising ‘Phoenix’ Aurora and Starburst Galaxies Light Up the Skies 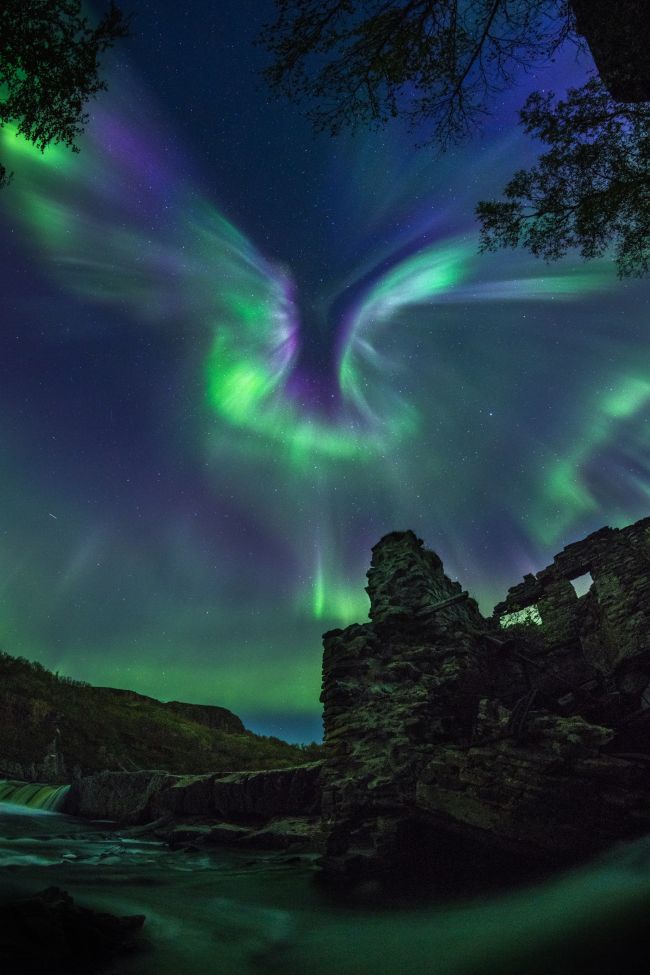 Russian photographer Alexander Stepanenko visited the Murmansk region in Russia for years, attempting to capture an image of the aurora over an abandoned military hydroelectric station. Stepanenko’s patience finally paid off on Sept. 10, 2018. This and other photos were recently selected for the shortlist of the Astronomy Photographer of the Year contest, organized by the Royal Observatory, Greenwich in the United Kingdom.

Read more about the “phoenix aurora” and other incredible astronomy photos.

Aurora outside the tiny cave

In Seljalandsfoss, Iceland, on Jan. 8, 2019, Chinese photographer Sutie Yang caught a mesmerizing view of an aurora from inside a cavern, framing the aurora alongside Iceland’s Seljalandsfoss waterfall.

Deep in the heart of Mordor

Australian photographer Andrew Campbell captured NGC 7293 — the Helix Nebula — one of the brightest and closest examples of a gas cloud created at the end of the life of a sun-like star. The remnant of the star’s core is still so energetic that it causes the previously expelled gas to fluoresce in glowing rings. Campbell created this colorful composite image from an exposure lasting 63 hours and 58 minutes, taken in Melbourne, Australia on Nov. 27, 2018.

For this image of the Devil’s Head Nebulae Complex, Hungarian photographer László Bagi used custom-built Newtonian reflecting telescope with an exposure of 29 hours, highlighting the nebula’s structure and depth. Bagi captured the photo in Szarvas, Hungary on Oct. 10, 2018.

The Gum Nebula, or Gum 12, is an emission nebula that extends 36 degrees across the night sky and is actually the very large remnant of the 12,000-year-old Vela supernova. The nebula mostly consists of hydrogen (red) and doubly ionized oxygen (blue). Australian photographer Eddie Trimarchi captured this bi-color image at Biggera Waters, Australia, on Feb. 25, 2018.

The Horsehead and Flame Nebula

American photographer Connor Matherne’s astonishing view of the Horsehead and Flame Nebulae was captured from the Deep Sky West Observatory in Rowe, New Mexico on Nov. 27, 2018. According to Matherne, his image was inspired by astrophotographer Ken Crawford’s image of the Horsehead Nebula, showcasing hydrogen filaments located within the blue nebula — NGC 2023 —, just below the Horsehead.

The Lord of the Rings and his court

Spanish photographer Jordi Delpeix Borrell’s image features Saturn’s magnificent rings shining broad and bright alongside several of its bright satellites. Titan appears at the bottom right, Rhea is on the top left, Tethys and Dione are to the right of the planet, and Enceladus and Mimas are under the rings. Borrell photographed the planet and moons from Long Bay, Barbados on July 5, 2018.

Photographer Raul Villaverde Fraile of Spain captured one of the most photographed astronomical objects — the Orion Nebula — in an exposure lasting 33 hours and 45 minutes. The image was taken on Jan. 6, 2019, at Ocentejo, Castile-La Mancha, Spain.

Out on a Limb