Ancient 70-Mile-Long Wall Found in Western Iran. But Who Built It? 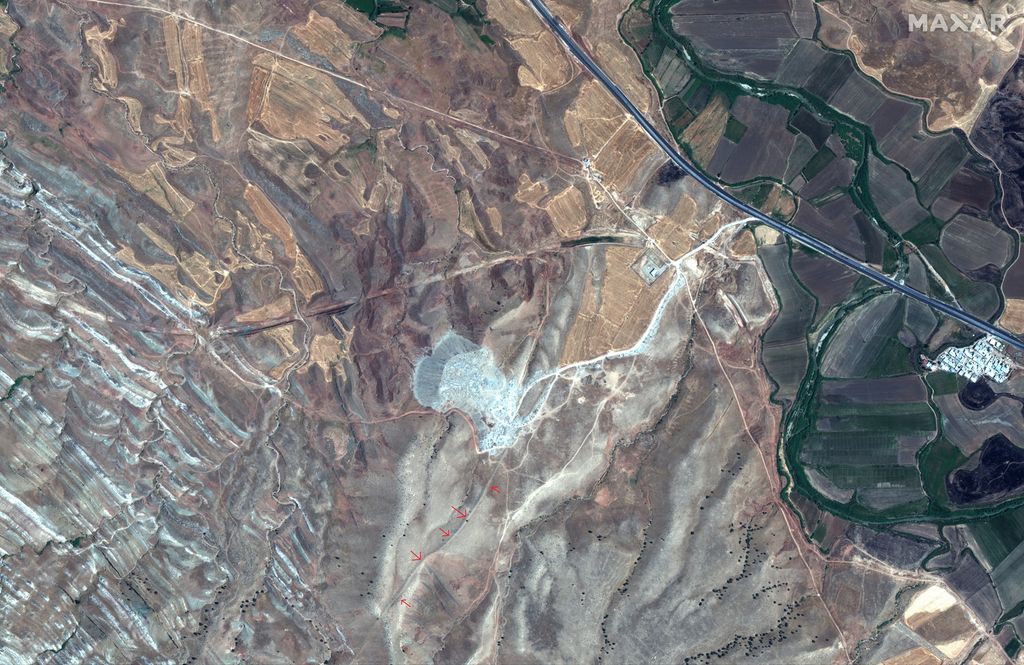 This satellite image was taken on July 31, 2019 by the WorldView-2 satellite. The red arrows show a surviving section of the Gawri Wall.
(Image: © 2019 Maxar Technologies)

Archaeologists have identified the remains of a stone wall in Iran about the length of the famous Hadrian’s Wall that was built across England by the Romans.
The wall, which extends about 71 miles (115 kilometers), was found in Sar Pol-e Zahab County in western Iran.

“With an estimated volume of approximately one million cubic meters [35,314,667 cubic feet] of stone, it would have required significant resources in terms of workforce, materials and time,” wrote Sajjad Alibaigi, an assistant professor of Iranian Archaeology at Razi University in Kermanshah, Iran, in an article published online in the journal Antiquity. The structure runs north-south from the Bamu Mountains in the north to an area near Zhaw Marg village in the south, Alibaigi wrote.
Pottery found along the wall suggests that it was built sometime between the fourth century B.C. and sixth century A.D., Alibaigi wrote. “Remnants of structures, now destroyed, are visible in places along the wall. These may have been associated turrets [small towers] or buildings,” wrote Alibaigi, noting that the wall itself is made from “natural local materials, such as cobbles and boulders, with gypsum mortar surviving in places.”

Though the wall’s existence was unknown to archaeologists, those living near it have long known about the wall, calling it the “Gawri Wall,” Alibaigi wrote.
A spokesperson for Antiquity said that since Alibaigi’s paper was published, the journal has learned that another group of archaeologists carried out earlier research on the wall; that research was never published in a journal.
Mysterious wall
Archaeologists are not certain who built the structure, and for what purpose. Because of the poor preservation of the barrier, the scientists aren’t even sure of its exact width and height. Their best estimates put it at 13 feet (4 meters) wide and about 10 feet (3 m) high, he said.
“It is unclear whether it was defensive or symbolic,” wrote Alibaigi, noting that it might mark the border for an ancient empire, perhaps the Parthians (who flourished between 247 B.C. and A.D. 224) or the Sassanians (A.D. 224-651). Both empires in western Iran built large castles, cities and irrigation systems, so it’s likely that both had the resources to build the Gawri Wall, wrote Alibaigi.
The newly discovered Gawri Wall is not the only ancient long wall in Iran. Archaeologists have previously found similar structures in the north and northeastern parts of Iran. Those may have had a defensive purpose.
Alibaigi hopes to carry out more research on the Gawri Wall in the future, he wrote. He did not respond to requests for comment.