By Yasemin Saplakoglu – Staff Writer a day ago 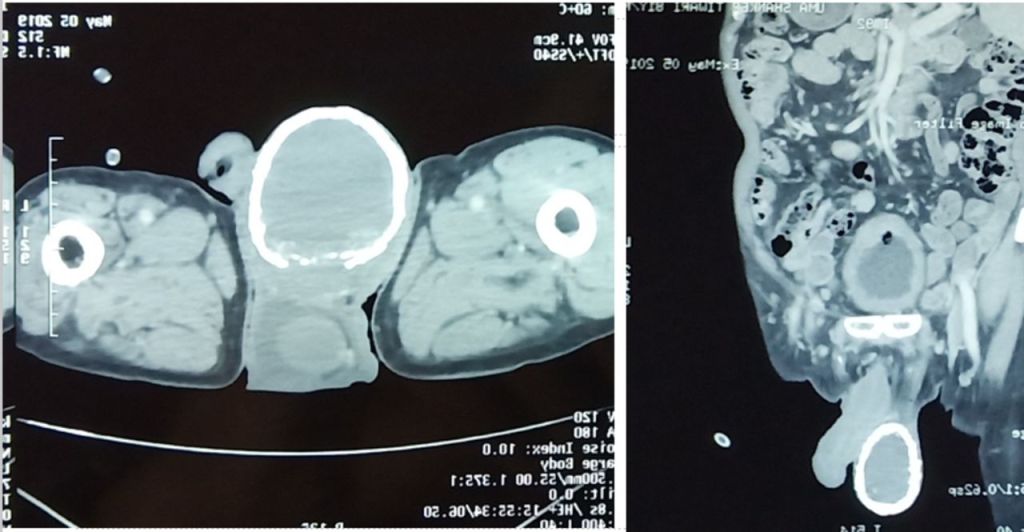 A CT scan showed that the man had calcification in his right scrotum.
(Image: © BMJ Case Reports 2020)

An 80-year-old man in India developed a bizarre, eggshell-like material around his testicle — the result of a rare reaction to a chronic infection, according to a new report of the case.
The man first went to the doctor because he was experiencing symptoms of a urinary tract infection, including blood in his urine, according to the report, which was published Jan. 6 in the journal BMJ Case Reports.

That’s when doctors discovered that he had an enlarged and “stony hard” right testicle. CT scans then revealed that the man had a fluid-filled sac around his testicle that had begun to calcify, or harden with deposits of calcium.

The fluid-filled sac, called a hydrocele, isn’t part of the typical anatomy of the scrotum, but it can develop in response to an infection. The development of a hydrocele is common, especially in newborns, and it typically disappears without treatment within a year. But it can also occur in older men in response to inflammation or injury.
The most common cause of this fluid-filled sac is lymphatic filariasis, an infection caused by certain species of parasitic worms. The larvae of these parasites are transmitted to humans through mosquito bites, and they usually develop into adults in human lymphatic vessels. The worms are typically found in tropical regions, including India, where 40% of the world’s cases of lymphatic filariasis occur.
Globally, 25 million men who were affected by lymphatic filariasis had hydroceles, and 15 million men affected by lymphatic filariasis had lymphedema, or swelling in the arms or legs, according to a 2019 update from the World Health Organization.
But it’s very uncommon for the sac to start to harden like an eggshell — a complication of the sac that was first described in a case report published in 1935. This “eggshell calcification” of the scrotum indicates that there’s some sort of chronic infection within the hydrocele, according to the report.
The infection usually can be treated with anti-filarial drugs, but sometimes, it may require surgery or other measures, such as specialized skin care and exercises, according to the report. The authors did not elaborate on the specific treatment their patient received. They recommended that people living in areas with a high risk of these infections be treated annually with anti-filarial drugs.