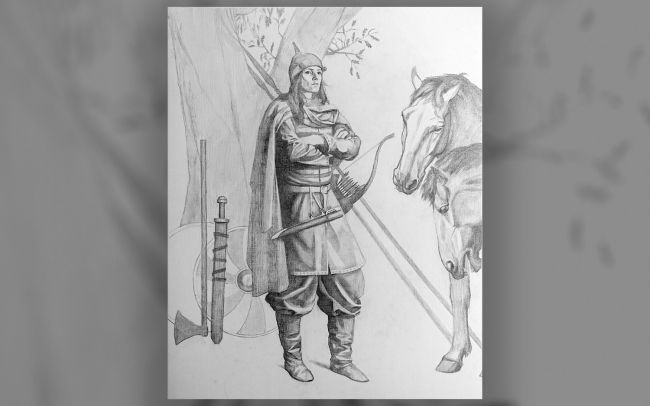 (Image credit: Drawing by Tancredi Valeri; Copyright Antiquity Publications Ltd.)
In 2017, a group of researchers in Sweden did a genetic analysis on the bones of a warrior Viking, long assumed to be male. However, the results showed that the individual had XX chromosomes, revealing that the deceased was, in fact, a woman.
There were so many questions about this discovery, that the researchers just published a new study that delved deeper into the finding. Here is an illustration of what the female warrior may have looked like. The clothing details are based, in part, on material found within the burial chamber, the researchers said. 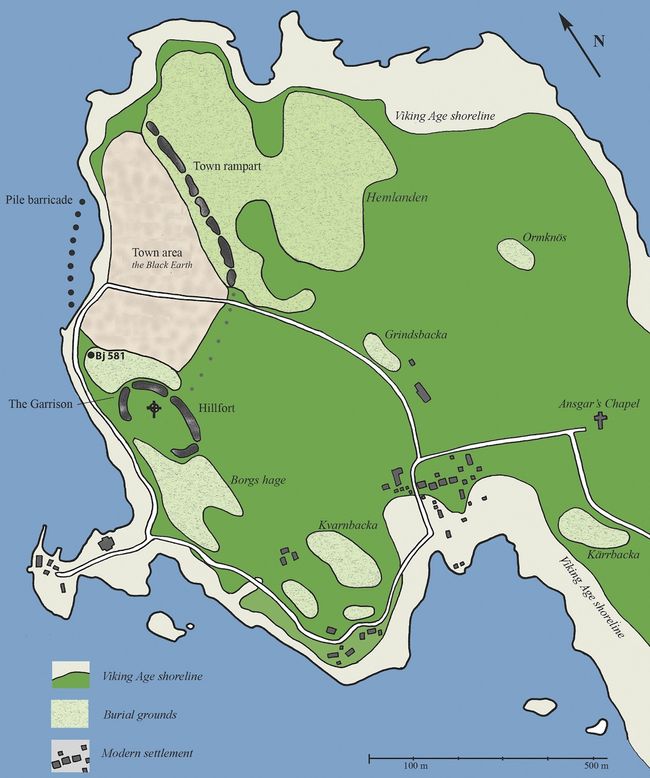 (Image credit: Figure prepared by Charlotte Hedenstierna-Jonson; Copyright Antiquity Publications Ltd.)
The burial, known as Bj.581, was found in Birka, a Viking settlement that flourished from about A.D. 750 to 950 in what is now central Sweden. 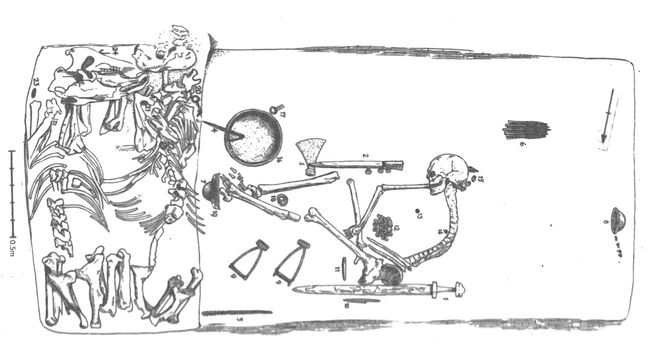 (Image credit: Drawn by Harald Olsson, redrawn from Hjalmar Stolpe’s field records; Copyright Antiquity Publications Ltd.)
The burial was originally found by archaeologist Hjalmar Stolpe in 1878. Here is a drawing based on a sketch by Stolpe. Notice the body (center) surrounded by weapons and a bag of game pieces. The bodies of two horses, one mare and one stallion, are on the left of the image. 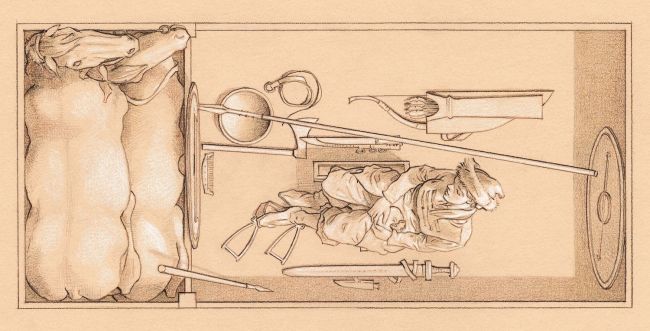 (Image credit: Drawing by Þórhallur Þráinsson; Copyright Antiquity Publications Ltd.)
Here’s how the burial might have looked just before it was closed in Viking times.
A warrior’s weapons 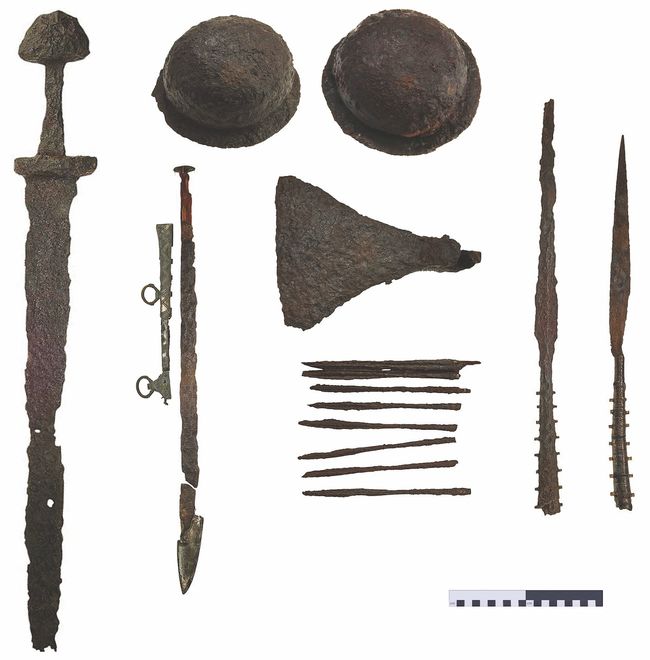 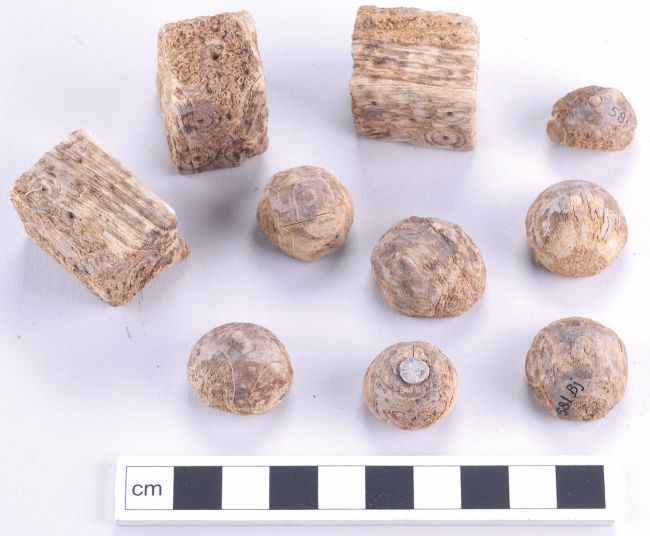 (Image credit: Photograph by Charlotte Hedenstierna-Jonson; Copyright Antiquity Publications Ltd.)
The woman had a bag on her lap. This bag contained three antler dice, a polyhedral weight. two spheroid weights and 28 gaming pieces, the researchers wrote in the study, published online yesterday (Feb. 19) in the journal Antiquity. Above are a few of the gaming pieces.
It’s possible that these gaming pieces indicate the warrior was a military commander, but this idea is still speculative.
Her silk cap 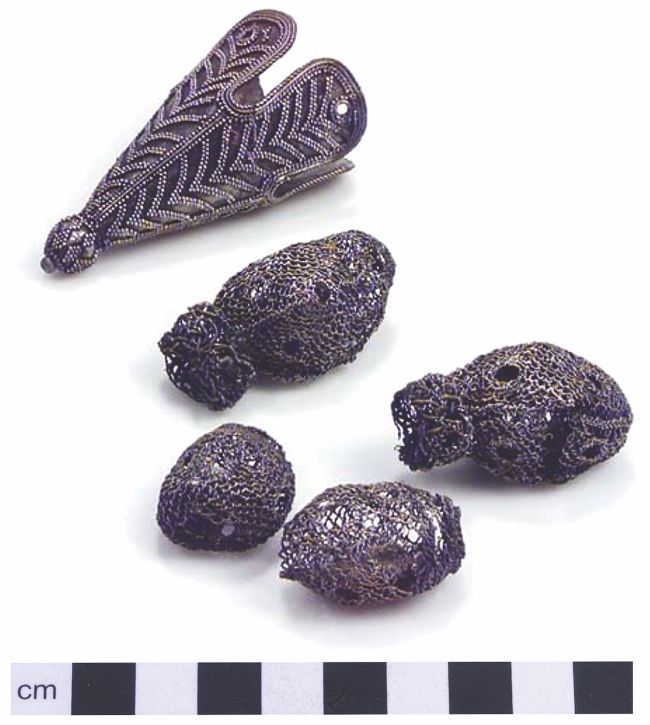 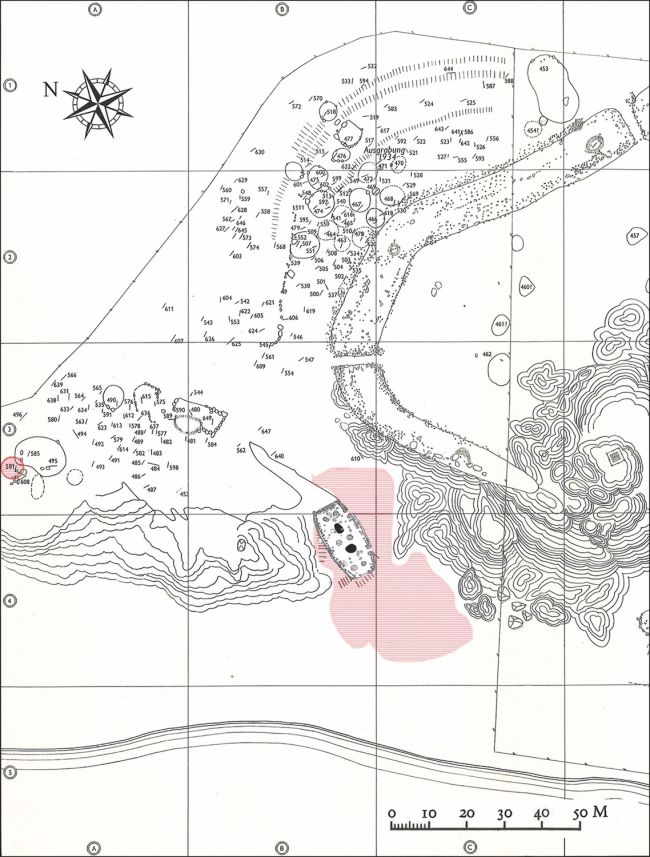 (Image credit: Figure by Charlotte Hedenstierna-Jonson incorporating material courtesy of Lena Holmquist, overlain on the 1888–1889 base survey by J.J. Nordstrand/Antiquarian Topographical Archives, Stockholm; Copyright Antiquity Publications Ltd.)
This map shows a number of excavated burials in Birka, including Bj.581 (circled in red). In fact, Bj.581 was located near other richly decorated graves and was a stone’s throw from the so-called garrison hall (the other red marked area), a 65-foot-long (20 meters) hall that contained a unique assemblage of weaponry. The fact that Bj.581 was buried near this hall denotes warrior status, but there are more questions about the status this unique individual had.