We can’t all be puppies—or even capybaras, for that matter. There’s a whole world of critters whose inner beauty goes unnoticed. Perfectly snuggly critters like naked mole rats have been mocked and called things like “the stuff of nightmares” or “the most terrifying thing I’ve ever seen.”

The truth is, so many of nature’s ugly animals have incredible qualities that deserve to be recognized. Below are just a few of the most beautiful weirdos who deserve our love and respect.

Habitat: For millions of years, these little cherubs have lived in large underground colonies, mainly located in central-east Africa. They can live with up to 300 individuals at a time.

Lifestyle: Naked mole rats eat roots and tubers, in addition to poop, according to the San Diego Zoo. I’m sorry.

Adorable fact: Naked mole rats are some of the most impressive creatures on the planet. In addition to the fact that they don’t age and are apparentlyimpervious to cancer, they can survive up to 18 minutes without oxygen, according to a recent study. By understanding how naked mole rats can survive so long without oxygen, we may be able to develop technology to keep victims of heart attacks or strokes alive longer.

On top of all of this, they’re actually quite lovable.

“What I’ve experienced over and over again is people will say, ‘Oh, they’re ugly, they’re gross,’ [but] every single person that I’ve taken to actually see the mole rats in person has come away saying they’re cute and they’re lovable,” Thomas Park, professor of biological sciences at the University of Illinois at Chicago, told Gizmodo. “The most misunderstood thing is that they’re ugly. I can understand why people think so, because they’re so unusual looking, but if you get to know them, they’re actually very gentle, they’re friendly creatures.”

Habitat: This small, vampire-looking species of deer is endemic to China and Myanmar (Burma).

Adorable fact: Despite their bloodthirsty appearance, tufted deer are actually quite shy. “This species is very secretive, most active at dawn and dusk, and is a true creature of habit, often traveling the same trails,” Imogene Cancellare, a conservation biologist and PhD student in the department of Entomology and Wildlife Ecology at the University of Delaware, told Gizmodo. “When startled, the tufted deer emits a loud alarm bark.” Just like a dog, but you know, with fangs!

Habitat: Star nosed moles live in the Northeastern United States and Canada, most often near swamps, floodplains, or other bodies of water.

Lifestyle: Kenneth Catania, a biologist at Vanderbilt University, told Gizmodo they mostly eat small invertebrates, insect larva, and earthworms. “The nose is the whole shebang for its sensory system,” Catania said. “It’s a sensitive touch organ…it functions almost like an eye.” The nose, in case you’re wondering, is that crazy bouquet of tentacles on the mole’s face.

Adorable fact: Though their strange faces might seem like an impairment, star-nosed moles are extremely quick. “They are the fastest foragers,” Catania said. “They are in the Guinness Book of World Records as the fastest foraging mammal.” According to information provided by Catania to the records book, the average amount of time it takes for a star-nosed mole to identify food as edible and consume it is 230 milliseconds. The fastest is 120 milliseconds.

Habitat: This sweet, shy little guy is native to central Argentina, where it lives in dry grasslands and plains.

Lifestyle: Not much is known about the pink fairy armadillo’s lifestyle, as it hasn’t been studied much. “We do know that its diet and habits are likely similar to other nocturnal armadillo species,” Cancellare said. “As a generalist insectivore, this 3-4.5 inch long armadillo likely uses its large, mole-like claws to dig in sand in search of insects, grubs, and worms.”

Adorable fact(s): We didn’t have a cute fact for this one unfortunately, only a terribly sad one. According to Cancellare, the pink fairy armadillo that looks like a “Furby covered with sashimi” is very popular in the illegal pet trade. “It dies quickly in captivity and does not make a good pet, like all wildlife,” she said. While the IUCN doesn’t technically consider the pink fairy armadillo endangered—it’s “data deficient,” due to how little its studied—the organization does note how at-risk it is due to the black market.

I guess the fact that it’s the smallest armadillo in the world is sort of cute.

Habitat: Axolotl are unusual in that they exist in one place in the wild—a lakecalled Xochimilco, just South of Mexico City.

Lifestyle: According to Stéphane Roy, a biologist at the Université de Montréal, the axolotl will eat basically anything that moves in front of it, but it mostly feasts on small crustaceans and fish. “They’re salamanders so they’re amphibians,” Roy told Gizmodo. “But the axolotl stays aquatic all its life. It doesn’t metamorphose to become terrestrial.”

Adorable fact: Overall, axolotls are pretty chill, arguably too laid back—they have no real way to defend themselves in the wild. “It’s basically a defenseless animal,” Roy said. “Its best defense mechanism is to stand still in the mud and not move in the hopes that it won’t be seen by predators.”

More of pathetic fact than a cute one, but it’s charming nonetheless.

Habitat: Aye-ayes live on the island of Madagascar, located off the Eastern coast of Mozambique.

Lifestyle: According to the Duke Lemur Center, the aye-aye is quite the picky eater. “The aye-aye’s diet is very specialized, consisting mainly of the interior of Ramy nuts, nectar from the Traveller’s Palm tree, some fungi and insect grubs,” the Duke Lemur Center says on its website. “The animals are also known to raid coconut plantations, and have been seen eating lychees and mangoes, which are also plantation crops.” Recent scientific research suggests that aye-ayes, like humans, prefer their fruity beverages with alcohol.

Adorable fact: “Aye-ayes are thought to be the only primate to use echolocation to find food,” Cancellare said. “To do this, the aye-aye uses those large ears and something called a toilet claw. Also called the grooming finger, the aye-aye’s third digit is much more slender that the other four fingers and is used as a hunting tool. The aye-aye uses this finger to tap on trees to listen for insect larvae. Once it hears something, the aye aye then uses its other claws to dig into the bark, then dig out invertebrates using its long toilet claw.”

Habitat: This miserable cutie lives off the coast of Australia and Tasmania, at depths of 330 to 9,200 feet.

Lifestyle: The blobfish is unsurprisingly oafish. According to Creature Features: Twenty-Five Animals Explain Why They Look the Way They Do, by Steve Jenkins and Robin Page, the blobfish’s diet mainly consists of mollusks, crabs, and sea urchins—probably sadness, too. According to Mental Floss, it doesn’t really hunt, rather, it just sits at the bottom of the ocean and opens its mouth when something tasty swims by.

Adorable fact: The “mascot” for blobfish was found in 2003 by a team of researchers studying the waters around New Zealand. This specimen was affectionately named “Mr. Blobby” by the crew. Sadly, the very dead Mr. Blobby now resides in Australian Museum’s Ichthyology Collection, in Sydney.

“The fixation process tightened Mr. Blobby’s skin and collapsed his—or her—snout,” Mark McGrouther, the museum’s fish manager, told Smithsonian. “He—or she—now looks like an 85-year-old Mr. Blobby.” To be fair, at the bottom of the ocean (and alive), our frowny friend probably wouldn’t look so curmudgeonly.

Pour one out for Mr. Blobby, gone but never forgotten. 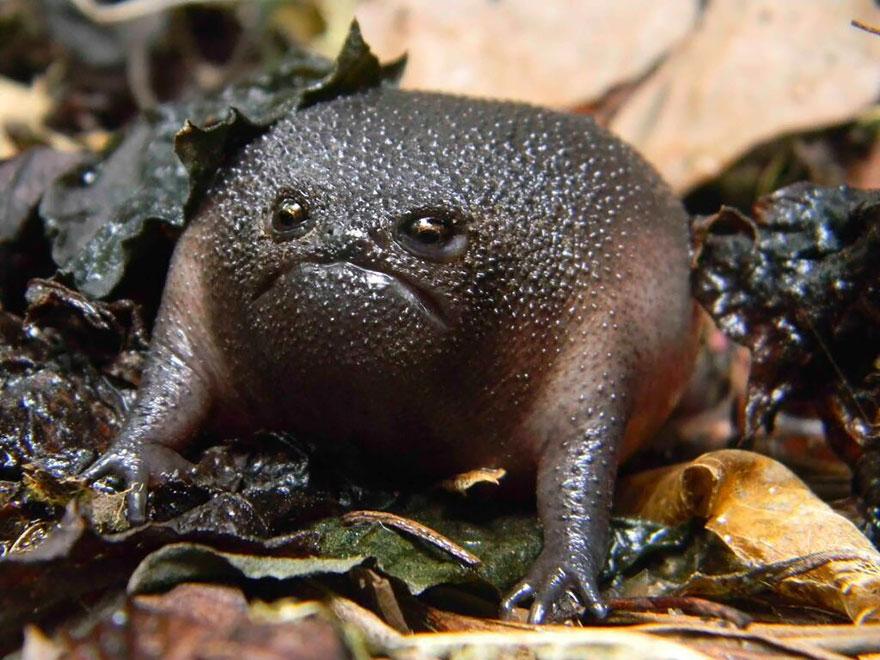 Habitat: According to the International Union for the Conservation of Nature (IUCN), the grumpy frog only lives in the mountains of South Africa.

Lifestyle: These are burrowing frogs that spend most of their lives underground. We don’t know much about their eating habits, though.

Adorable fact: There’s actually a legitimate reason why the black rain frog looks like an angry lump. “Many people know rain frog species from the adorable viral videos circulating on the internet,” Nicole F. Angeli, a conservation biologist at the Smithsonian National Museum of Natural History, told Gizmodo. “Inflating is a defensive posture effective when a predator tries to pull an individual from a burrow. These puffy little frogs are the product of millions of years of survival in a harsh world!” 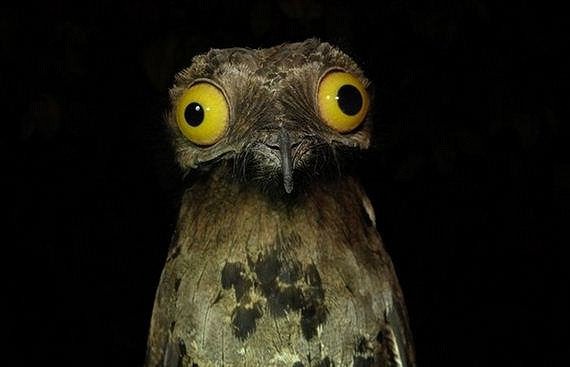 Habitat: These bizarre birdies live in the forests of Central and South America, even though I wish they lived by me in Brooklyn.

Lifestyle: The Potoo is a nocturnal bird, as evidenced by its enormous eyes.“The large eyes of this bird help it find flying insects at night,” Cancellare explained.

Adorable fact: Sometimes, the Potoo likes to pretend it’s a tree. “During the day this species is entirely immobile, perching upright like a statue, closing its eyes, and blending in with the branches it hides in,” Cancellare said. Please imagine this goofy ass bird trying to blend in with anything and try not to laugh. Or cry.