The pots may have been seen as a symbols of the womb in which to bury the deceased – adults and infants. 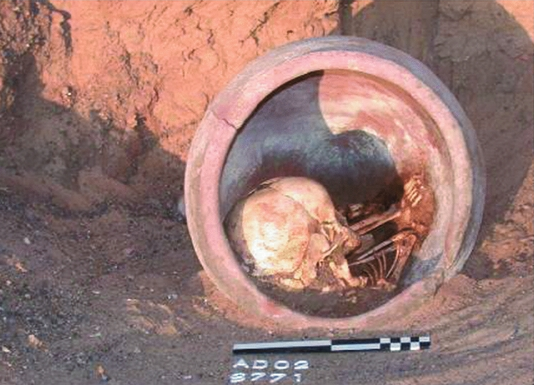 Ancient Egyptians may have become famous for the beautiful and complex tombs they built for their kings at the heart of pyramids, but they also buried their dead in ceramic vessels – a practice known as “pot burial”.

This constitutes one of the most widespread funerary practices across the cultures and regions of the ancient world, but there is still a lot of debate regarding why it came about and what its purpose was. Scholars also disagree about what its meaning in the context of Ancient Egyptian culture was.

In such burial, people reused small domestic vessels. For this reason, pot burials have been taken to indicate low value and have long been associated with poverty by archaeologists. These burials are also regarded as the most frequent form of interment for children, infants and fetuses in ancient Egypt, second only to direct interment into the earth.

Now, a study recently published in the journal Antiquity challenges these theories. The two authors, Ronika Power and Yann Tristant from Macquarie University in Sydney, reviewed published data about pot burials at 46 sites in Egypt, near the Nile River. All were dated from about 3300BC to 1650BC. Their findings suggest that pot burials may have had a more complex and symbolic value within Ancient Egyptian culture than is often portrayed.

Some of the evidence reviewed in the study contradict the view that pot burials were conducted by poor people. Some of these burials in fact appear to have been very richly furnished. This is the case of a pot found in the tomb of an ancient Governor from the Old Kingdom / early First Intermediate Period. It contains the remains of a baby and comes with an array of sophisticated grave goods including beads covered in gold foil.

The researcher also question the hypothesis that pot burials were often used for babies and fetuses. Some of the pots actually contain the remains of adults. Furthermore, of the 1809 child and foetal remains found at the sites described in the study, only 329 young individuals had been buried ceramic pots. For deceased babies, burials in the ground was in fact much more common.

However, the study’s most interesting finding is perhaps that the pots were not seen as old objects that needed to be reused, but as containers with a highly symbolic value. In many ancient cultures, from Europe to North Africa, pot burials were associated with a strong fertility symbolism is associated with the pot burials. The ceramic pots stood as a symbol of the uterus. Burying the corpse was intended as a return to the womb in death to promote metaphorical rebirth in the afterlife.

Analysing hieroglyphic texts found in an ancient Egyptian tomb chapel, the researchers suggest that this interpretation could also apply to Egyptian pot burials, as the writings bear evidence that Egytpians also saw the pots as symbols of the womb and fertility.

“The ceramic containers may have reflected symbolic associations between pots, wombs and eggs, facilitating rebirth and transition into the afterlife”, the authors say. This means that pot burials were not necessarily a sign that people didn’t have the resources to bury their loved-ones. Rather, their funeral might have had a special symbolic importance.

“Pots were deliberately selected and reused as funerary containers for what may have been a variety of pragmatic and symbolic reasons”, the authors conclude.