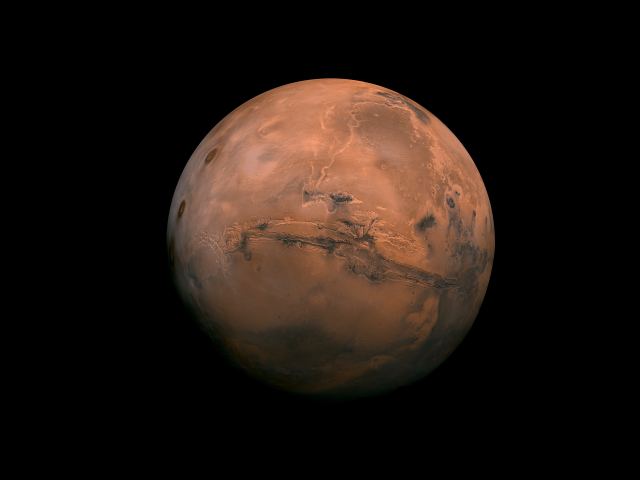 (An illustration of Mars against the blackness of space.NASA/JPL-Caltech; Dave Mosher/Business Insider)

Like Earth, planet Mars is a shooting gallery for rogue space rocks that zip around at tens of thousands of miles per hour.

But the red planet has barely 1% of the atmosphere of Earth’s to slow down, vaporize, and break up any of these stray lumps of stone and metal.

It also lacks the flowing surface water and robust weather of our home planet to quickly erase signs of the impact craters these strays leave behind.

As a result, Mars is littered with celestial pockmarks and, occasionally, researchers spot fresh impact craters using orbiting satellites like the Mars Reconnaissance Orbiter and its HiRISE camera.

Studying fresh impacts not only helps researchers peek at freshly exposed dirt on Mars, whichmay have once been habitable, but also helps assess how much risk Earth might face from small yet dangerous space rocks.

Below is a zoomed-out image of one asteroid strike that was photographed just a few months ago, and it shows the giant black stain the event left behind: 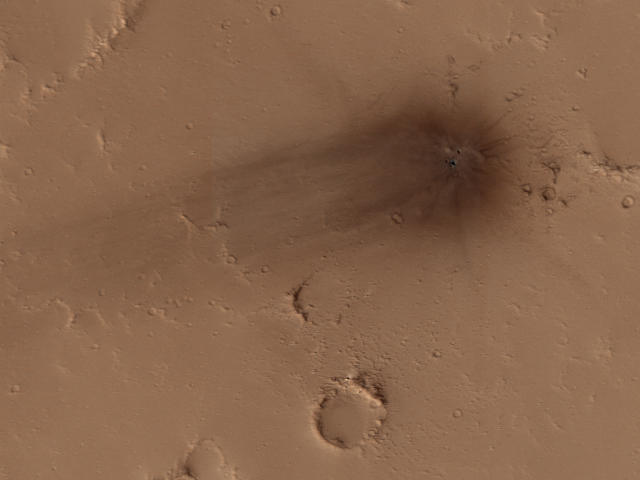 (An impact crater on Mars that formed sometime between January 2014 and August 2016.NASA/JPL/University of Arizona)

The large and circular dark stain is roughly 650 feet (200 meters) from top to bottom, or about the length of a 60-story skyscraper lying on its side, and the central impact crater is roughly a few feet or meters across. It formed sometime between January 2014 and August 2016, so it’s pretty fresh.

“[B]ecause Mars is so dusty (and there is wind there), all of that darker subsurface material was excavated and then billowed around the impact and downwind,” Ari Espinoza, a HiRISE media team member, told Business Insider in an email.

“Think of dropping a tennis ball onto a mound of very fine powder,” Espinoza said: “you’ll see the powder billow about and get everywhere, even though the tennis ball isn’t very large by comparison.”

The HiRISE camera is powerful enough to resolve objects just 31 inches (80 centimeters) across, so it’s worth zooming in to see the detail of the impact crater.

Amid the billow and streaks of fresh dirt, you can see a cluster of small craters, which may indicate the space rock broke up a little bit on its way toward the Martian surface — striking it like buckshot: 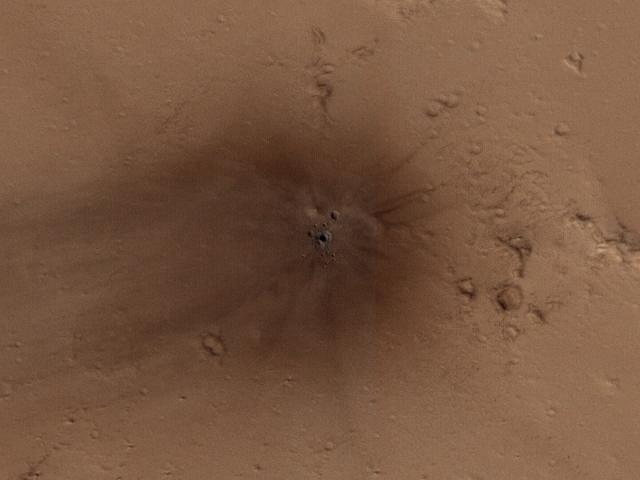 (A close-up of a fresh impact crater on Mars.NASA/JPL/University of Arizona)

Here’s one more ultra-close-up view of the crater zone: 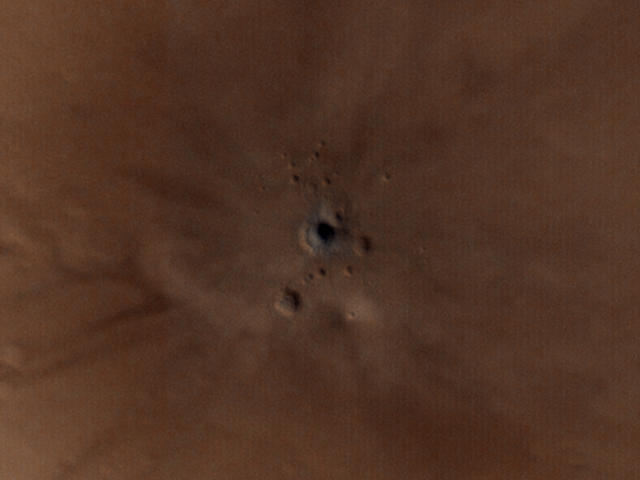 (A cluster of fresh impact craters on Mars.NASA/JPL/University of Arizona)

Espinoza couldn’t say exactly how big the asteroid or piece of comet that caused the crater might have been, but noted they’re actually “pretty common.”

“[W]e’ve catalogued several hundred over the past decade,” he said.

Which shouldn’t make any of us comfortable, since even small near-Earth objects can burst in our atmosphere and wreak havoc on the ground.