Stash of Water May Be Lurking Deep Beneath Earth’s Surface 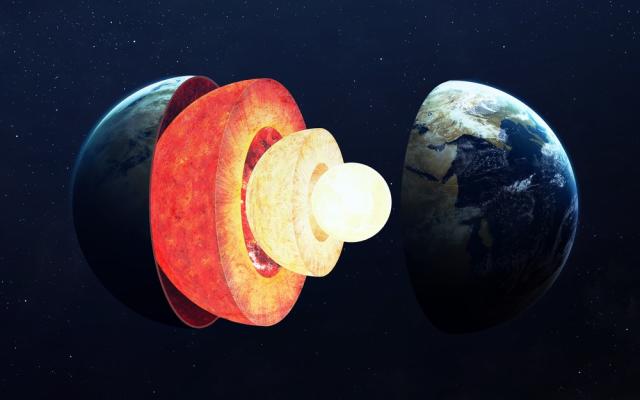 A trove of water may be hiding more than 250 miles (400 kilometers) beneath your feet.

That’s where the Earth’s mantle meets the crust. Geoscientists had long thought that below this transition zone (starting at 255 miles, or 410 km, deep) a water-filled mineral called brucite was unstable and so decomposed, sending water molecules flowing toward the planet’s surface.

But new research suggests that before brucite — which is 50 percent magnesium oxide and 50 percent water — decomposes, it transforms into another, more stable 3D structure. The finding, detailed online Nov. 21 in the journal Proceedings of the National Academy of Sciences, means there’s a stash of water located deeper in Earth than was previously thought. [In Photos: Ocean Hidden Beneath Earth’s Surface]

“[This finding] was not entirely expected,” said study co-author Andreas Hermann, a lecturer in computational physics at the University of Edinburgh in Scotland. “[That’s] because people have studied this material for decades and nobody ever thought of looking whether there would be another phase before it eventually fell apart.”

Scientists previously believed that brucite remained stable only as far as the transition zone, a 155-mile-deep (250 km) layer just below the upper mantle. In part, the mineral’s structure informed this view. Brucite is a layered material in which the molecules in each layer are strongly bound to each other but weakly connected to other layers. A material like this, if squeezed with enough pressure, must undergo some kind of change. Researchers previously assumed that in response to transition zone pressure, which reaches about 200,000 atmospheres, brucite would crumble. (One atmosphere is approximately is the pressure at sea level).

“This is big-data computing,” said Hermann. “We create thousands of structures, optimize them all and do calculations accurate enough that if something stands out as more stable than something else, we can reliably say that it is so.”

Brucite is a well-studied and relatively simple mineral. Even so, Hermann said that the key to the new calculations was ignoring existing assumptions about brucite. After several months of running various structures through their computer program, the researchers found a previously unknown phase of brucite that would be able to withstand the high pressures found in the lower mantle.

Even with this new phase of brucite, scientists are still unable to directly measure the amount of the substance in the mantle or how much water the mineral holds. However, Hermann and Mookherjee did work out the elastic properties of the new phase of brucite. Knowing this, said Hermann, seismologists may be able to detect how much brucite is in the mantle because the signatures of earthquakes differ based on the elasticity of the rock through which they travel.

Current estimates suggest that the deep Earth may hold as much water as all the oceans on the planet’s surface combined. This reservoir of water, and the additional trove brucite may also hold, are vitally important to the movement of materials through the Earth. As water-containing minerals travel down through the Earth’s layers, the materials eventually decompose, releasing the water that makes its way back to the surface, often through volcanic activity. [Infographic: Earth’s Tallest Mountain to Its Deepest Ocean Trench]

Water is essential to the recycling of minerals through volcanism and plate tectonics, because it provides the lubrication needed for the various rock materials to move past each other, as occurs in subduction zones. It also helps some materials dissolve as the move through the rock cycle. Without water, said Hermann, the planet would come to a geologic standstill. This means no new crust or soil, and a halt in volcanism; these changes could have catastrophic effects on the planet’s land and atmosphere.

Aside from potentially changing scientists’ understanding of water reservoirs far below the Earth’s surface, Hermann said this research champions a new way of thinking about the deep Earth in general. The researchers would not have found this new phase if they had favored the accepted version, he said.