From Wikipedia, the free encyclopedia
The Mier expedition was an offshoot of the Somervell expedition, an unsuccessful military operation launched in November 1842 by a Texian militia against Mexican border settlements. It included a major battle at Ciudad Mier on December 26 and 27, 1842 which ended with a Mexican victory. The attack was partly in hopes of financial gain and partly in retaliation for the Dawson Massacre (as named by Texans) earlier that year, in which thirty-six Texas militia were killed by the Mexican Army. Both conflicts were part of continuing efforts by each side to control the land between the Rio Grande and Nueces River. Texas believed that this territory had been ceded to the Republic in the Treaties of Velasco, by which they gained independence; but Mexico did not agree.

Although Antonio López de Santa Anna, the ruler of Mexico, was defeated at the Battle of San Jacinto and signed the Treaties of Velasco in 1836, ceding Texas territory from Mexican control (these treaties had not been ratified by the Mexican legislature), his forces continued to invade the Republic of Texas hoping to regain control, particularly of the territory between the Rio Grande and Nueces River.Texas had hardly any settlements there. 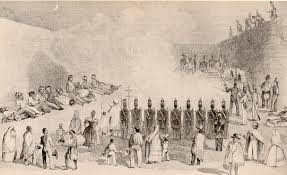 On September 17, 1842, Texian and Mexican forces engaged at Salado Creek, east of San Antonio. After a separate favorable Texian engagement earlier in the day, a reinforcement company of 54 Texas militia, mostly from Fayette County, under the command of Nicholas Mosby Dawson, began advancing on the rear of the Mexican Army. The Mexican commander, General Adrián Woll, sent 500 of his cavalrymen and two cannons to attack the group. The Texians held their own against the Mexican soldiers, but their fatalities mounted after the cannons came within range. The battle lasted just over an hour, resulting in 36 Texians dead and 15 captured in what became known as the Dawson Massacre. 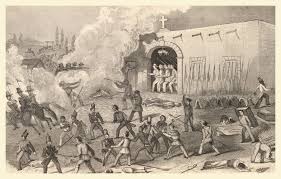 On November 25, 1842, Alexander Somervell, a customs officer from Matagorda Island, left San Antonio with 700 men under his command on a military expedition to punish the Mexican Army for raids in Texas. The Somervell Expedition recaptured Laredo on December 7, 1842, and then, with a reduced force of 500, took the Mexican town of Guerrero. Without serious backing for the expedition from the Republic of Texas, Somervell ordered his men to disband and return home on December 19, 1842.

Five captains and their men disobeyed, initiating the start of the privateering Mier Expedition. More men were gathered at La Grange, Texas. They continued the march to Ciudad Mier under the command of William S. Fisher.

On December 20, 1842, the 308 Texian soldiers, who ignored orders to pull back from the Rio Grande to Gonzales, approached Ciudad Mier. They camped on the Texas side of the Rio Grande. 261 soldiers participated in the capture of the town, while the others remained behind as the camp guard.

The Texians were unaware that 3,000 Mexican troops were in the area under the command of Generals Francisco Mexia andPedro de Ampudia. In the Battle of Mier that resulted, the Texians were outnumbered ten to one. They inflicted heavy casualties on the Mexicans—650 dead and 200 wounded—but they were forced to surrender on December 26.

The Mexicans took 243 Texians prisoner and marched them toward Mexico City via Matamoros, Tamaulipas, and Monterrey,Nuevo León.

On February 11, 1843, 181 Texians escaped but, by the end of the month, the lack of food and water in the mountainous Mexican desert resulted in 176 surrendering or being recaptured. This was in the vicinity of Salado, Tamaulipas.

When the prisoners arrived in Saltillo, Coahuila, they learned that an outraged Santa Anna had ordered all the escapees to be executed, but General and Governor Francisco Mexía of the state of Coahuila refused to follow the order. The new commander, Colonel Domingo Huerta, moved the prisoners to El Rancho Salado. By this time, diplomatic efforts on behalf of Texas by the foreign ministers of the United States and Great Britain led Santa Anna to compromise: he said one in ten would be killed.

To help determine who would die, Huerta had 159 white beans and seventeen black beans placed in a pot. In what came to be known as the Black Bean Episode or the Bean Lottery, the Texians were blindfolded and ordered to draw beans. Officers and enlisted men, in alphabetical order, were ordered to draw. The seventeen men who drew black beans were allowed to write letters home and were executed by firing squad. On the evening of March 25, 1843, the Texians were shot in two groups, one of nine men and one of eight. According to legend, Huerta placed the black beans in the jar last and had the officers pick first, so that they would make up the majority of those killed.

The first Texan to draw a black bean was Major James Decatur Cocke. A witness recalled that Cocke held up the bean between his forefinger and thumb, and with a smile of contempt, said, “Boys, I told you so; I never failed in my life to draw a prize.” He later told a fellow Texian, “They only rob me of forty years.” Fearing that the Mexicans would strip his body after he was dead, he removed his pants and gave them to a companion whose own clothing was in worse shape. He was shot with the sixteen others who drew black beans on March 25, 1843. His last words were reported to have been, “Tell my friends I die with grace.” 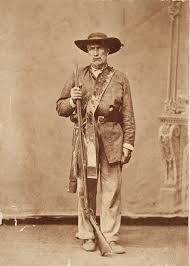 Captain Ewen Cameron had drawn a white bean, but was ordered executed anyway by Santa Anna a month later while being held at Perote Prison. As he waited to die, Cameron refused to confess to a priest. Standing before the firing squad, Cameron declined the offer of a blindfold, declaring, “For the liberty of Texas, Ewen Cameron can look death in the face.” He opened his hunting shirt and yelled at his executioners, “Fuego!” (Fire!).

The survivors who picked white beans, including Bigfoot Wallace, and Samuel Walker, finished the march to Mexico City. They were later imprisoned at Perote Prison in the state ofVeracruz, along with the fifteen survivors from the Dawson Massacre and about 35 other men captured by General Adrián Woll in San Antonio. Some of the Texians escaped from Perote or died there. Most were prisoners until they were released, by order of Santa Anna, on September 16, 1844.

In 1847, during the Mexican-American War, the U.S. Army occupied northeastern Mexico. Captain John E. Dusenbury, a white bean survivor, returned to El Rancho Salado and exhumed the remains of his comrades. He traveled with the remains on a ship to Galveston, and by wagon to La Grange in Fayette County, Texas. La Grange citizens retrieved the remains of the men killed in the Dawson Massacre from their burial site near Salado Creek in Bexar County. The remains of both groups of men were reinterred in a ceremony attended by 1,000 people. They were buried in a large common tomb in 1848, in a cement vault on a bluff one mile south of La Grange. The grave site is now part of a state park, the Monument Hill and Kreische Brewery State Historic Sites.

The Black Bean Episode is the subject of Frederic Remington‘s painting The Mier Expedition: The Drawing of the Black Bean.