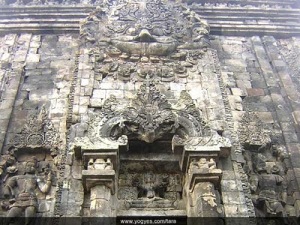 Tara Temple is the oldest Buddhism temple in Yogyakarta that was built by Rakai Panangkaran, the king of Syailendra dynasty who also conceptualized the construction of Borobudur Temple.

Most people will mention Borobudur when talking about Buddhism temples. Whereas, there are many other Buddhism temples in Yogyakarta; one of them that is closely related to Borobudur is Tara temple. This temple that is located in Kalibening village in Kalasan was built by the same person who conceptualized Borobudur temple, namely Rakai Panangkaran. Since it is located in Kalasan area, this temple is popular with the name of Kalasan temple.

Completed in 778 AD, Tara temple becomes the oldest Buddhism temple in Yogyakarta. This temple that is situated close to Yogya-Solo Street was a present of the marriage of Pancapana of Sanjaya dynasty to Dyah Pramudya Wardhani of Syailendra dynasty. In addition to a marriage present, the temple was also realization of the kings’ proposal to build another holy temple for goddess Tara and a monastery for the monks.

Tara temple is a building in the form of a cube with the size of each side of 45 meters and 34 meters high. Vertically, this temple consists of three parts, namely temple foot, temple body and temple roof. The foot of the temple is a building on square stones and a wide stone. On this part, there is a stair with makara ornament at the end. Meanwhile, around the temple foot there are ornaments of climbing plants that come out from pots.

The body of the temple protrudes at the central side. At the outer surface of the temple body, a hollow is ornamented with a standing goddess holding lotus. In southeast part, there is a small room with throne ornamented with the motif of a lion standing on an elephant’s back. The room can be accessed from the other room at the east side.

The roof of the temple is octagonal and consists of two stories. An effigy describing Buddha is located in the first story while on the second story there is a statue describing Yani Buddha. The top of the temple is a square symbolizing Semeru summit with ornaments of domes. At the interface of the temple body and the roof, there is a flower ornament of a dwarf named Gana.

If you observe the temple in detail, you will also find beautiful relief on its surface; for example, relief of tree of god and cloud and the dwellers of the heaven producing sounds. The dwellers of the heaven hold rebab (two-stringed music instrument), shell, and camara. There are also ornaments of flowers, leaves and climbing plants. Relief at Tara temple is typical since they are coated with special cement called Brajalepha, made from sap of certain tree.

Around the temple, there are 52 domes as high as around 4.6 meters. Even though those domes are not intact anymore, since some parts are missing, you can still enjoy them. Visiting this temple of which construction history is known from Candi inscription in Panagari letters, you will acknowledge the greatness of Rakai Panangkaran who even had the opportunity to build a holy building in Thailand.

This temple also proves that in the past there was an effort to unite people of different religions. The proof is that Panangkaran who was a Hindu built the Tara temple in response to the proposal of Buddhism monks to be presented to Pancapana who is also a Buddhist. This temple is also one of the holy buildings that inspired Atisha, a Buddhist from India who once visited Borobodur and spread Buddhism to Tibet.